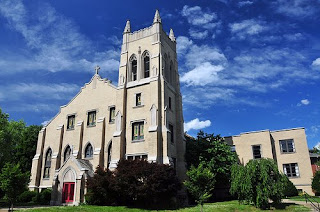 At this moment the last service is taking place at Edenside Christian Church, my church home during the nearly nine years I lived in Louisville.   I'm sad to see the 106 year old church go.

Since I'm going to be in Houston when that service happens, I submitted a statement that is going to be read during the service, and here it is.

I was saddened to learn that after over a century of service to the community, Edenside Christian Church is permanently closing its doors, and I won't get another opportunity to 'sliiiiide into Edenside' the next time I'm blessed to visit Louisville.

Since I wanted to say a few words during this service and will be 1000 miles away from you in the Lone Star State when it happens, I hope this will suffice.

When I first encountered Edenside Christian Church, it was a mere 48 hours after I arrived in Louisville after moving from Houston in late September 2001.  I was still depressed, homesick  and not dealing well with the ripple effects of losing an airline job I'd held for 14 years and dearly loved.   Dawn just basically told me to get up and get dressed because we were going for a ride.

Our destination was here, and I got to meet the gregarious Rev. Sally McClain that day.   You have to love a pastor with a formidable intellect and such a sense of humor she has a stuffed Cartman doll on her bookshelf. I'd also arrived just in time for the Louisville AIDS Walk, and that sunny, clear and cool fall weekend I got to participate in it with her and other member of the Edenside family.

And yes, that's what you were to me during the eight and a half wonderful years that Edenside became my church home because my blood family was back in Texas.  You were some of the first people I met in town and before I even officially became an Edensider you made me feel welcomed, loved and included in the life of this church.

That helped me get over my homesickness and eventually settle into my life in Louisville.  Whether it was spinning Christmas tunes with soul during our Bardstown Aglow events, playing softball on the coed team. having the honor of being the DJ at Derek's wedding, the times I was able to be a worship leader that I wish I could have done more often, and conversations with all the wonderful people who are and have ever been part of this church, some of the fondest memories I have of my time in Kentucky are centered on Edenside.

Those times as a worship leader and Edenside's social justice leanings also reawakened my own desire to get back into social justice advocacy, which had taken a severe hit during that 2001-2003 period.

And as the native Texan in this congregation, you know I got a kick out of listening to all the shady comments being thrown back and forth between you Cats, Cards and Hoosier fans during basketball season.

But the best thing about Edenside is that when I finally did head back to Houston in 2010, I left a better, more confident, spiritually grounded person than when I first arrived thanks in large part to Sally and many of you Edensiders.

So while I'm saddened that the doors of Edenside will be closing forever and I won't get the opportunity to hear Rev. Beaumer deliver a sermon inside its hallowed 100 year old walls, the church and its memories will live on in the hearts and minds of all who walked through its doors.