I'm hearing disturbing chatter coming from my human rights sources here in Houston concerning the proposed Houston Human Rights Ordinance that is supposed to be unveiled later this month.

I'm hearing that the proposed ordinance will cover city employment and public accommodations but not cover private employment citywide and I'm about to go into Maya Wilkes mode over that.

If it is true and the reporting I'm seeing from Lone Star Q seems to back that up, that is unacceptable to me as a transperson of color who represents the group that gets the disproportionate share of anti-TBLG discrimination aimed at them in Houston and that is facing 26% unemployment.  .

The Izza Lopez case emphatically demonstrated along with the harassment and 2010 arrest of Tyjanae Moore for using the women's restroom in the downtown Houston Public Library branch why a comprehensive human rights ordinance is needed and necessary.

And as I stated in the September 2013 post, I will not accept trans human rights crumbs in Houston and will fight with ever fiber of my being to ensure that any human rights ordinance passed in my hometown has  citywide job protections and public accommodations language .

It takes nine votes to pass anything on Houston City Council, and we're one vote shy of passing an ordinance with citywide job protections with four undecided councilmembers.  Three of them that are alleged to be noncommittal share my ethnic heritage, so Houston Black SGL, trans and bi community, time to get busy expressing ourselves. 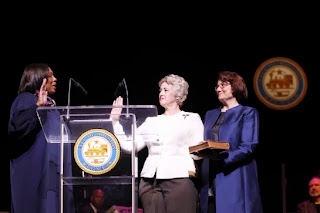 This is the question that was asked by the Houston GLBT Caucus of Mayor Parker when you came asking for the caucus endorsement last year:

Would you be willing to introduce a non-discrimination ordinance, which prohibits discrimination on the basis of sexual orientation and gender identity or expression in employment, housing, and public accommodation, that provides reasonable exemptions for small businesses, religious organizations, and federally exempt residential property owners?

This is how you answered it at that time.

And Houston City Council members, when the Caucus asked:

If elected, would you publicly advocate for and vote in favor of a non-discrimination ordinance, which prohibits discrimination on the basis of sexual orientation and gender identity or expression in employment, housing, and public accommodation, that provides reasonable exemptions for small businesses, religious organizations, and federally exempt residential property owners?

The Houston City Council members and candidates for council answered:

So mine and other inquiring Houston LGBT minds wanna know, what's changed your minds since you were asking for our votes last year?

If you councilmembers wish to see the language of the proposed HRO before committing one way or another I can understand that.  But if you have already have seen that language and it's as bad as I'm hearing, then it's time for some profiles in political courage.

Note to Maverick Welsh, Houston LGBT Caucus president:  I'm not liking the incrementalist chatter coming out of your mouth either.


Welsh added that the Caucus will still support the proposed ordinance if it doesn’t include citywide employment protections. “I don’t think the perfect has to be the enemy of the good,” he said.in a Lone Star Q interview.

'The perfect' as you called it Maverick is 'Necessary for our survival' when seen from the viewpoint of trans, bi and  SGL people of color disproportionately affected by anti-GLBT discrimination in this city.

We want a Houston HRO that FIXES the problems we face, not locks the wretched status quo of discrimination in place so you Mr Welsh and your like minded peeps can sip appletinis at the next Houston HRC gala and declare a win

We still have time to ask for what people in the Houston TBLG community expect in a long overdue Houston Human Rights Ordinance:  that it fix the problem and it has enforcement teeth.

Thanks to the Houston Stonewall Young Democrats for the form so you can click on this link and do precisely that.   Here's the contact information for Houston City Council members so you can also respectfully express yourselves and ask for that comprehensive Houston Human Rights ordinance we elected them to enact.

So we're asking politely (for now) Houston City Council to fix it.   We only get one shot at this, so let's do it right the first time, pass the Houston Human Rights Ordinance the entire community can get behind, then work to defend it from Dave Welch and his haters.