We have seen this disgusting racist pattern before.    It was present when CeCe McDonald was sentenced to jail time in Minnesota despite defending herself from being violently attacked by a white supremacist and his buddies.

Jewlyes Gutierrez was facing criminal charges for defending herself after a November fight at her high school despite being bullied and attacked  by three cis female girls in California.   Never mind the inconvenient fact that Jewlyes had been bullied by the same girls for over a year and tried to get indifferent school officials to intervene to stop it.

And now we have the jacked up case of Jane Doe.  She is a 16 year old trans girl of color who despite being in that system since age 4, surviving numerous incidents of violence, sexual assault and abuse, that in some cases perpetrated by the people in the Connecticut Department of Children and Families (DCF) that were supposed to help and protect her, she was sent to an adult male prison on April 8 despite not being charged with any crime.   Only increasing national outrage over this got her moved to an adult female prison, which is still messed up.

And the reason why this happened?  Because according to the fear mongering DCF Commissioner Joette Katz, Jane was 'far too dangerous' to remain in their care.

Really?   When DCF personnel are complicit in some of the violence that Jane Doe has faced, they are obligated to fix their part of the problem they caused in Jane's young life.

Throwing her in a lockup with adult male prisoners is not fixing the problem, it's exacerbating and pouring gasoline on it. 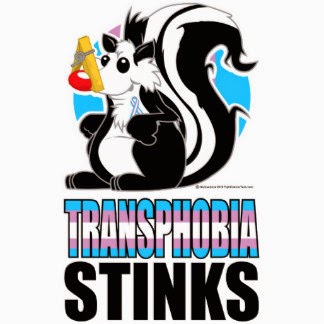 In all these cases, we have the intersections of several problematic societal layers. The first problem is the obvious whiff of racism combined with the overwhelming stench of transphobia in all these cases.  The other dynamic involved here is the racist assumption that trans youth of color are 'uniquely violent' and 'dangerous to women'.

Some of that 'dangerous to women' piece has its roots in the predator memes trans exclusionary radical feminists (TERF) have been peddling for over four decades.

And hello, let's inject another dose of reality into this conversation.  If you're constantly being picked on or have violence directed at you simply for trying to live your trans life as best you can, sooner or later you are going to snap and lash out at the person that sent you over the edge.  Hell, I was an adult when I transitioned, and there were days I'd had enough of people's transphobic bullshyt and snapped on the very next person that crossed my path spouting transphobic ish.

The bottom line is that I'm tired of transwomen of color who far too often are the victims of violent attacks aimed at them by cisgender people being given the side eye by a transphobic society as if they are the problem.

When we transwomen of color already have to deal with societal drama brought on by our ethnicity,  and we have to deal with an unjust and racist  legal system, the last thing we need is the misguided perception of being tagged as 'uniquely violent' being thrown into this toxic transphobic stew.
Posted by Monica Roberts at 10:30 AM