Today is the milestone 40th birthday of Canadian actress Tricia Helfer, who is as any BSG fan can tell you well known for her role as the humanoid Cylon Number 6 on Battlestar Galactica..

She most recently turned up on our TV screens again in the role of Texas Ranger Molly Parker on the Sofia Vergara produced ABC show Killer Women.

Tricia was born on this date in rural Donalda, Alberta in 1974.

It's also Friday, and y'all know what that means.   It's time for my weekly exercise in finding out what people or groups exhibited mind numbing stupidity, jaw dropping ignorance, brazen hypocrisy and just over the top behavior that will make you say WTF when you read it.

It's time for this week's edition of the TransGriot Shut Up Fool Awards.


Honorable mention number one is a group awards for the Miami-Dade County Board of Elections for coming up with a policy that closes the restrooms at polling places.   Yeah, the same county that in non-white areas of it took up to six hours to vote.

Time to get some mobile port-a-potties with signs on them that say 'the GOP is crapping on your right to vote.'

Honorable mention number three goes to TINA.org for their transphobic Truth In Advertising ad that reinforces severat stereotypes about transpeople

Honorable mention number four goes to Dr. Charles Murray, the racist advisor to Texas GOP gubernatorial candidate Greg Abbott who said during a human rights summit at UT this week in honor of the 50th anniversary of the passage of the landmark Civil Rights Act of 1964 that 'women are not significant thinkers'

For Honorable mention number five, we head to my hometown and put the owners of Y Beauty Supply on blast for not only telling a Black couple, "You people always steal", but strip searched Deadra Patten and her fiance for a pair of $3 earrings.

Seriously?    To quote Ms.Patten concerning the racial profiling, “Everybody doesn’t shoplift," said Patten in the KHOU-TV interview. "Everybody is not a thief. There are still honest people in the world.” 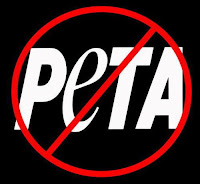 This week's Shut Up Fool winner is PETA.  These idiots prove once again there are no depths they will sink to when they are searching for publicity.

They are seeking to buy the Akron, OH  boyhood home of serial killer Jeffrey Dahmer and turn it into a vegan restaurant.