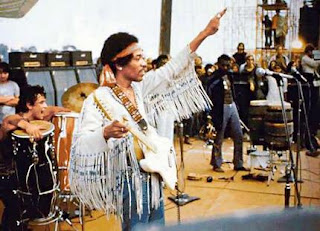 1969 was quite the year for historical events. This weekend marks the 40th anniversary of one that has taken on legendary proportions.

I was just a kid in elementary school when an estimated 300,000 people gathered on a muddy Bethel, New York dairy farm from August 15-17 to witness a concert called Woodstock.

Janis Joplin, Jimi Hendrix, Creedence Clearwater Revival, Jefferson Airplane, Santana and the Who were some of the rock and roll greats were all assembled there for the three days of music. Sadly, Janis Joplin and Jimi Hendrix would be gone a year later.

But it was a signature and touchstone event for a generation, and for those who were there it's hard to believe that 40 years have passed.
Posted by Monica Roberts at 6:00 AM

The Root has a couple of good pieces that I linked to recently about Woodstock and, in particular, Black folks' positioning in its historical meaning.

I wish I had been there, but I was just a preschooler. My parents were the type of groovy folks who would have gone to such a celebration--had it happened 1 year later when they were in grad school, that is.