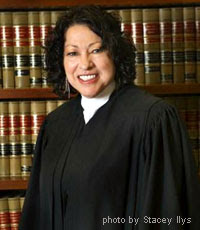 When the Supreme Court kicks off it's fall term in October, it will be another historic moment for our country.

For the first time in our country's history, the Supreme Court photo will include a Latina justice.

Judge Sonia Sotomayor was just confirmed confirmed by the Senate moments ago on a 68-31 mostly party line vote as our 111th associate justice of the Supreme Court.

Only nine Republicans voted for her such as Mel Martinez of Florida.

This is a great day not only for Latino Americans but all Americans. Congratulations to Justice Sotomayor who will be sworn in Saturday by Chief Justice John Roberts as our third female justice and third* non-white justice.

Clarence Thomas is a BINO-Black in Name Only. Now can we get a sistah on the Court to counteract Clarence Thomas' self-hating bullcrap?

When she finally joins the court this October she'll be the only justice who wa a prosecutor, has trial court experience, and 17 years experience at two levels of the federal court system.
Posted by Monica Roberts at 2:15 PM