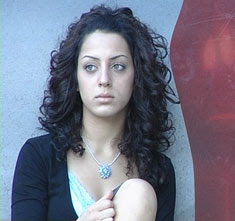 You know I love pageants and have documented on TransGriot the various transgender ones around the world that happen.

We've had some fierce debates about the relevance of them and will have them again. I still line up on the side of people who see pageants as a stepping stone to a better life or for who winning them is their dream.

So with that being said, I was intrigued by an episode of PBS Wide Angle documentary series called 'Contestant No 2' which began running on PBS July 29.

It documents the story of Duah Feres, a young Arab-Israeli Druze woman who dreams of a life beyond her Galilee village. Her decision to enter the Miss Israel pageant triggers a chain of events that impact Duah, her family and her village.

It also leads us to ask the question how far can an idealistic youth trying to live her life and achieve her dreams go to challenge the conservative mores and attitudes of her people? How far will the older generation go to enforce their will and their values on her?

It was a fascinating documentary to watch. You feel for Duah, who literally put her life on the line to do it. It was filmed in 2006, so I'm wondering what Duah's life is like now.

But I don't want to spoil the Wide Angle episode for you, so I'll let y'all watch it for yourselves and comment below.
Posted by Monica Roberts at 4:30 AM