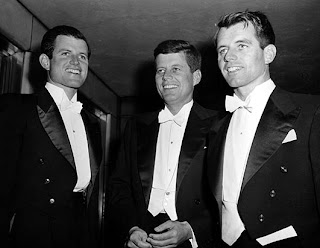 "For me, a few hours ago, this campaign came to an end. For all those whose cares have been our concern, the work goes on, the cause endures, the hope still lives, and the dream shall never die." Sen. Ted Kennedy, 1980 DNC

Senator Edward Moore 'Ted' Kennedy, the person once considered the political lightweight of the family who became a powerful and influential liberal senator, died today at age 77 after a year long battle with brain cancer.

Ted Kennedy has served in the Senate seat once held by his brother John since 1962, which is the third longest term in US history.

He was an advocate for labor unions and a higher minimum wage. He was involved in the civil rights and voting rights debates of the 1960s, and he pressed for an expanded role for the government in health care.

He supported the creation of Medicare in 1965 and of a national system of neighborhood health care centers as part of the Economic Opportunity Act of 1966. 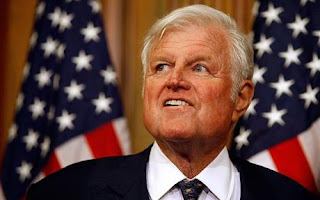 As a member of the Senate Judiciary Committee, starting with Thurgood Marshall, he participated in the confirmation debates of every current Supreme Court member or nominee of the late 20th-early 21st century with the exception of Justice Sonia Sotomayor.

He was an influential voice within the Democratic party. He campaigned extensively in 2004 for Sen John Kerry and his early endorsement of Sen. Barack Obama in 2008 helped him cement the liberal wing of the party prior to his successful run for the presidency.

President Obama released a statement after hearing the news while on vacation in Martha's Vineyard, MA

Michelle and I were heartbroken to learn this morning of the death of our dear friend, Senator Ted Kennedy. 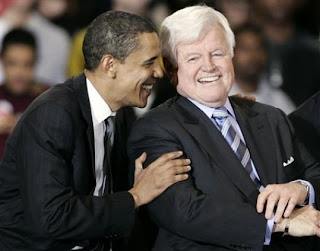 For five decades, virtually every major piece of legislation to advance the civil rights, health and economic well being of the American people bore his name and resulted from his efforts.

I valued his wise counsel in the Senate, where, regardless of the swirl of events, he always had time for a new colleague. I cherished his confidence and momentous support in my race for the Presidency. And even as he waged a valiant struggle with a mortal illness, I've profited as President from his encouragement and wisdom.

An important chapter in our history has come to an end. Our country has lost a great leader, who picked up the torch of his fallen brothers and became the greatest United States Senator of our time.

And the Kennedy family has lost their patriarch, a tower of strength and support through good times and bad.

Our hearts and prayers go out to them today--to his wonderful wife, Vicki, his children Ted Jr., Patrick and Kara, his grandchildren and his extended family.

Ted Kennedy is definitely going to be missed, especially when we have this contentious and ignorance filled debate over one of his pet issues, health care reform taking place.
Posted by Monica Roberts at 7:52 AM