The Penguins Of Madagascar 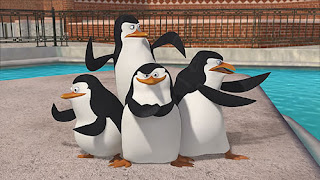 When I watched the original Madagascar movies, I fell in love with the antics of Skipper, Kowalski, Rico and Private.

Those lovable action oriented penguins made both movies even more entertaining for me than chuckling over the antics of Alex, Gloria, Melman, Marty and King Julien.

I was thrilled to find out that Nickelodeon gave them their own animated series called The Penguins of Madagascar.

After their globetrotting adventures in the two Madagascar movies, they're back at the Central Park Zoo. Unfortunately for Skipper and the gang King Julien, Maurice and Mort are next door at the lemur house. They've also added another character in Marlene the otter, whose habitat is next door to the penguins as well.

As the stories evolve you occasionally see the monkeys and other zoo denizens as Skipper and the gang conduct their various hilarious missions inside and outside the zoo.

It's a guilty pleasure of mine that I'll probably add to my DVD collection along with the two Madagascar movies I already own as soon as they release it.
Posted by Monica Roberts at 11:01 PM