Yesterday we witnessed a historic moment in our country's history as Judge Sonia Sotomayor was confirmed in by the Senate by a 68-31 vote.

Read it and weep, Repugnicans. Sonia Sotomayor is the 111th person to become a Supreme court justice and the era of white male conservatives getting Supreme Court vacancies is thankfully over. You peeps spent so much time letting your white sheets show in opposing this eminently qualified nominee that you've driven GOP support for the GOP down to nearly African American levels at 4%. 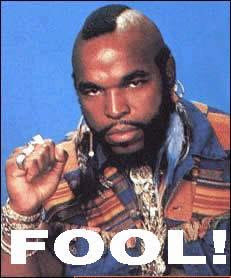 I guess y'all think the Latino community will forget about all this BS before the 2010 election cycle.

Dream on. The African-American community still hasn't forgotten about Hurricane Katrina and all the other GOP political atrocities aimed at us over the years.

Now it's time to see what fools or fools who exhibited less than judicious behavior and let their stupidity and ignorance reign supreme.

As usual, there were many worthy candidates, several repeat ones and several Shut Up Fool! of the Year candidates.

This week's fool is Rep. Todd Akin (R-MO). He held a town hall meeting in his district a few days ago. While commenting on the crap that his Democratic colleagues are facing from astroturfed 'protesters' during their town hall meetings he cracked lynching jokes.

Ain't nothing funny Rep. Akin about lynching. But then again, why am I not surprised it's coming from a monoracial party whose motto is Whiteness uber Alles?