Guess What Shade The Anti-Health Care Peeps Are Throwing Now? 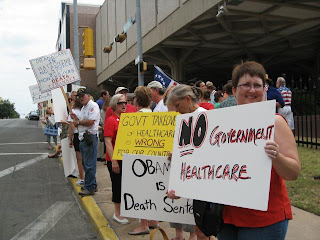 The health care industry, the GOP, their lobbying groups and shills have thrown $130 million dollars and counting into the battle to kill health care reform.

They have tried to scare seniors by claiming health care is a plot to kill our senior citizens. They have distorted, delayed and now organized mobs similar to the the 2000 'Brooks Brothers Riots' that shut down the Bush-Gore recount in Miami-Dade County with the express goal of shutting down discussions at Democratic congressional legislators town hall meetings.

I was wondering how long it would take for the Forces of Intolerance and their corporate paymasters to use transpeople for one of their classic tried and true tactics to oppose reforms.

The Greed Over People party have joined in the effort to scare and bamboozle the stupid Faux News watching sheeple into opposing health care reform that benefits them all in the name of protecting their windfall profits:.

No sooner had that thought crossed my mind than when I flipped on the computer and read Autumn Sandeen's post at Pam's House Blend about her name being dragged through the muck of the health care debate by conservafool Peter LaBarbera.

Folks, you don't have to be very politically sophisticated to predict that GLBT (gay, lesbian, bisexual, transgender) activists and their liberal allies are going to demand "Tranny-Care" under a federal health insurance system, in the name of "fairness" and "inclusion" - even if it's not passed initially as a "benefit." And yes, the idea of subsidizing body-disfiguring "operations" surely would be considered "queer" by the average tax-paying American. Already, trans activists are strategizing on the best ways to get taxpayers to pay for their gender-confused mutilations "sex change" procedures -- and Human Rights Campaign and other homosexual lobby groups boast of their support for same in cities like San Francisco.
-- Peter LaBarbera, www.aftah.com

Okay peeps, if y'all want affordable health care in our lifetimes, it's past time to fight these bastards tooth and nail.
Posted by Monica Roberts at 11:00 PM