Gender Drama At The 1936 Berlin Olympics 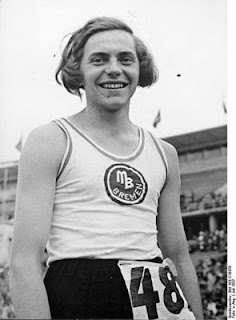 Since this has come up repeatedly once again in the context of international sport, thought it was time to point out the history behind why Caster Semenya and other women throughout the 20th and early 21st century have undergone gender testing.

The watershed year for the paranoia behind men competing in women's international sporting events is 1936.

Nazi Germany wanted the Berlin Olympics to be a political showcase for the Third Reich. They set the goal of surpassing the 21 total medals Germany won in the 1932 Los Angeles Games, and one way they sought to do that was sneaking their 'supermen' into the women's events.

To accomplish that goal, the Nazis forced Hitler Youth member Hermann Ratjen to live and compete for three years as Dora Ratjen.

While Nazi Germany did lead all nations in winning 89 total medals and 33 golds at the Berlin Games, one medal they didn't get was in the women's Olympic high jump. Ratjen finished fourth in the event. At the 1938 European championships in Vienna Ratjen did set a then women's world record of 5 feet 5.75 inches in the high jump.

Dora was busted while traveling in Germany after the European championships. While wearing feminine attire Ratjen was spotted at a train station with five o'clock shadow on his face. A doctor was summoned, and the truth about Dora's actual genitalia was revealed. Ratjen was barred from competing in international athletics and went back to his life as Hermann.

Hermann Ratjen told his story in 1957, then faded from the spotlight until his death in April 2008 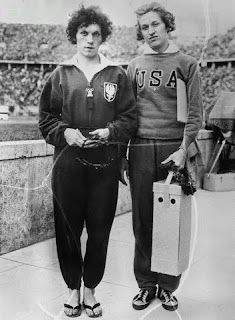 The 1936 Berlin Games also brought us the drama between bitter rivals Helen Stephens and Stella Walsh.

Walsh set the then 100m world record of 11.7 seconds in 1934 and was the defending Olympic champion. But starting in 1935 Stephens served noticed that she was the up and coming running phenom.

When spectators congratulated her on being the new 'fastest woman in the world' and for beating Stella Walsh, she asked, "Who is Stella Walsh?" That comment got back to Stella Walsh, pissed her off and it was on like Donkey Kong between the two women after that.

In the 1936 Games Walsh chose to run for Poland just as she did at the 1932 Games. It didn't change the fact she was having trouble beating Stephens in the States. 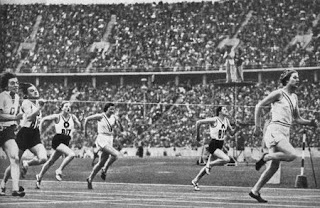 During their careers, Stephens never lost to Walsh in their head to head matchups, and the 1936 100m Olympic final was no exception.

Stephens not only beat Walsh, but ran it in a 11.5 second time that broke Walsh's two year old world record.

Walsh, angry about being beaten by her rival, promptly threw 'that's a man' shade at Stephens which the Polish press amplified. She protested to officials that Stephens was really a man falsely running as a woman because no woman could run that fast.

German officials examined Stephens, pronounced her female, and the protest was disallowed. 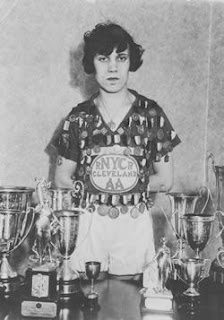 This incident was ironic in light of Walsh's tragic December 4, 1980 death at age 69. She was struck by a stray bullet in the wake of a robbery attempt of a Cleveland, OH discount store while unloading her shopping cart to her car.

Her autopsy revealed she had mosaicism, which meant that, chromosomally, she was mostly, but not all, male but had androgynous looks to live her life as and be raised female.

So you can thank Nazi Germany, a bitter rivalry between two sprinters and subsequent eastern Bloc cheating for the current gender testing drama that's occurring now.
Posted by Monica Roberts at 9:09 AM