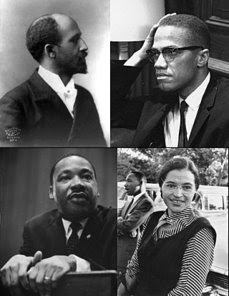 As much as I despise Bishop Harry Jackson and his like minded band of homobigots in the Hi Impact Leadership Coalition, it pains me to say it, but I now agree with them on one argument that they've been making over the last few years.

I know the late Coretta Scott King said otherwise a few years before her death, but the reprehensible actions of Rep. Barney Frank and HRC have stripped whatever tenuous claims to the moral high ground the GLB movement once had.

So from now on I don't wanna hear or see ANY GLB leader try to claim that 'they' are the heirs of the 60's Civil Rights movement.

The GLB movement has taken off its cloak and revealed its true nature. It is a movement for straight-acting white gay men and women only and screw 'errbody' else.

Yeah, they want rights. They want rights for themselves only. And just like some of their misguided straight white male and female brethren some GLB people want the 'special right' to discriminate against someone to make themselves feel superior.

If you really were an inclusive, morally upright movement, you would have never thrown transgender people out of it or treated us like unwanted stepchildren.

The 60's civil rights movement wasn't an 'incremental movement', so you can drop that spin line right now. Even if they had to take 'half a loaf' as they did with the 1957 Civil Rights Act (which by the way was just as controversial back in the day as the current furor over Frank's Folly), they made sure that no one was left out and that whatever compromises were made put them in a better position to get what we African-Americans needed the next time.

This is the first civil rights movement in history that has not only cut people out, but doesn't even want to pass legislation that will help all of the people in their OWN group.

So a memo to you GLB peeps who agree with Barney. Until you've waited 246 years to get your rights, start working to craft and pass legislation that considers other people worse off than you and make them an equal partner in writing that legislation, please refrain from comparing your selfish civil rights push to mine.
Posted by Monica Roberts at 10:55 AM