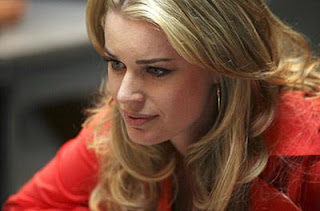 In a 2007-2008 TV season which continues last year's trend of having transgender characters, in 2007-08 we have the novel concept of a transwoman playing a transwoman

Unfortunately we transsistahs are still getting the short end of the stick.

While many people in the transgender community are excited about Candis Cayne playing Carmelita on ABC's Dirty Sexy Money, and are looking forward to the continued Season 2 exploits of Rebecca Romijn's character Alexis Meade on Ugly Betty, there was another transgender character that debuted this week as well.

On the ABC show Big Shots, it intrduces us in the debut episode to a character played by a transsistah named Jazzmun.

But before we hail that as progress, Jazzmun is playing Dontrelle, a transsexual hooker.

It figures that we transsistahs once again get stuck being painted by the hooker brush while white transwomen are seen running a magazine or being the love interest of a US senator.

Memo to Hollywood: Is it so hard for you to create an African-American transgender character that fits the reality of the 90% of us who don't partake of sex work to make our living? Is it that difficult for you to craft an African-American transgender character that isn't the punchline of a joke or doesn't end up dead in the first five minutes of the show?

If it is, may I suggest calling Sheryl Lee Ralph, who played a transsistah named Claire on Showtime's short lived Barbershop: The Series. I think she'd be happy to give y'all some pointers on creating a non-stereotypical transwoman of African descent. If she's not available, dial up Norman Lear, who in addition to creating All In The Family's Beverly LaSalle, created Edith Stokes, the first realistic transsistah character for The Jefferson's back in 1977.

If they aren't available, just e-mail me and I'll be happy to do it if the price is right. 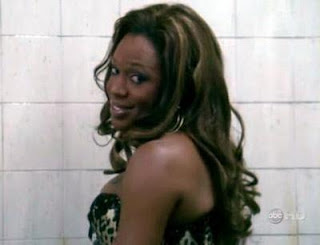 I'm sick of seeing transsistahs being portrayed as hookers or murder victims. We have enough problems in the African-American community trying to dispel that negative image. Just when we're starting to make a little progress, here comes a TV show that reinforces the negativity that we've worked so hard to counteract.

I'm looking forward to the day when I see an African-American transgender character on TV again that reflects my values and the way that I live my life.

I guess if I want to see that type of positive transsistah character, I'm gonna have to dust off that script I was working on and do it my damned self.
Posted by Monica Roberts at 10:55 PM