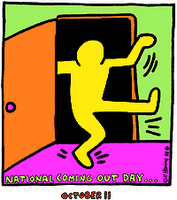 Today is National Coming Out Day. In the spirit of that and in the midst of this ongoing family feud over ENDA, we've had some folks in the GLB community have a coming out of sorts as well.

Their poster child just happens to be the guy who is quarterbacking ENDA throughout the House, Rep. Barney Frank.

The transbigots, like their kissin' cousins in hate groups and the Religious Reich use their power, White Male Privilege and media bully pulpits to thwart the progress of a minority group for their own selfish gain.

It should be clear at this point who the leading transbigots are in this community. John Aravosis and Chris Crain along with Barney head the list. There are other transbigots that operate on a national, state and local level who see it as their mission to make the GLB community rainbow pure and transgender free. 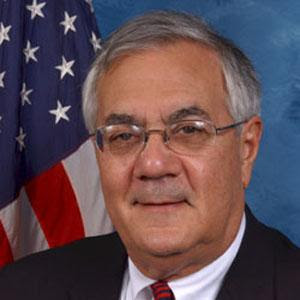 But as I know from my African-American history, nothing is more dangerous to civil rights than having bigots in charge of writing and enacting civil rights law.

So Barney, come clean and stop prevaricating. You hate transgender people and have since your days in the Massachusetts Legislature. You're not a friend to our community.

Can you handle that truth?

A friend of our community would fight just as hard or harder to include us in legislation that we need, instead of engaging in Orwellian doublespeak and blaming the transgender community for the failure of your 'with all deliberate speed' approach to including transgender peeps inro federal law.

If you were the transgender community's best friend, you'd be honest with the GLB community and tell them, like Lambda Legal did that transgender inclusion in ENDA is necessary for this bill to cover 'errbody' in this community.

Khadijah Farmer's suit is Exhibit A to the fact that discrimination based on 'gender identity' happens not only to transgender peeps, but gay, lesbian and straight people as well.

If you were the champion for transgender people you claim you are, then you need to stop telling the lie that we haven't done the education on the Hill. We been educating folks on the Hill since 1994. I've personally taken part in lobbying efforts in 1998, 1999 and 2007 and helped plan NTAC's 2001 lobbying effort.

Maybe that education isn't getting through because of the HRCites that inhabit many of the congressional staff positions on the Hill in liberal-progressive offices. It wouldn't shock me if these aides are conveniently failing to pass on the information from transgender people that visit their offices or shield you congressmembers from it.

There are reams of information on the Internet and elsewhere about the violence, the unemployment/underemployment we face, and the general lack of respect for our civil rights that transpeople face. If you claim there are legislators who need 'more educating', who are they?

You're not going to tell us that because you know that 24 hours after you utter their names, they'll be flooded with calls from the transgender community and our allies.

Barney, you don't want that education to happen because you and the Mattachine clones in the GLB community DON'T want a transgender inclusive ENDA to pass. You have been duplicitous and underhanded not just during this entire sorry affair, but the entire time you've led the effort to pass ENDA.

So why should we transgender people trust you, much less believe anything you say now? You have let your personal hatred of transgender people get in the way of doing what's morally right and just. Having you as the lead legislator for the efforts to pass ENDA is the equivalent of asking the KKK Grand Wizard to pass federal legislation that would benefit African-Americans.

He'd do to African-Americans exactly what you're doing, Rep. Frank. Cut us out of the bill, then come up with some tortured logic and spin to try to justify it.

Oh snap, that was the modus operandi for the Dixiecrats.

It's past time for somebody that doesn't have a personal hatred for transpeople to become the lead legislator for getting ENDA passed.
Posted by Monica Roberts at 12:37 PM

I read about Khadijah Farmer's case. I can't believe that happened in Greenwich Village! I felt so bad for her reading that story.I hope she wins a lot of money, so that that can send a message and possibly set a legal precident.

And your use of the phrase "Oh Snap" took me back. (lol)

Ms. Deux,
That's not unusual for transgender people to feel the sting of discrimination inside the GLB community.

Ms. Farmer was probably profiled as a transgender person, which is probably why she went through that.

I hope that it does establish a precent that we can use to establish one and for all we get the message across that gender is not a rigid binary system.