Drag Kings In The House At MIT 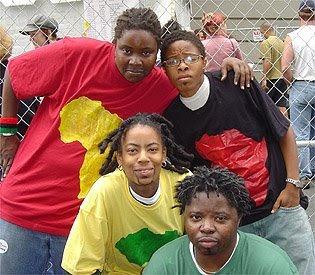 Move over, drag queens. The drag kings are about to elbow you off stage.

For four days this week, the all-black Nappy Grooves drag king troupe from Oakland, Calif., will be setting up shop in a place that doesn't exactly conjure up San Francisco's Castro district: MIT.

Then again, looks can be deceiving: The land of geeks and nerds hosts the largest annual student drag show in the country every year.

For the uninitiated, drag kings are mostly female performance artists who dress like males and sport facial hair makeup; drag queens are men who dress in female clothes and makeup, often for performances.

Where they both meet is at MIT's "Fierce Forever" drag show, scheduled to be held next April 24.

"We usually have more drag queens than drag kings in ('Fierce Forever')," said Michele Oshima, director of student and artist-in-residence programs at MIT. "There's not as much gender balance."

As a way to expose the MIT community to the flip side of the drag world and to raise students' consciousness about gender and race, Oshima booked Nappy Grooves for a residence at the school (Wednesday through Nov. 3), including a free public talk, "Too Hot to Handle," on Wednesday at 7 p.m. at the Broad Institute Auditorium. The press release calls it an adult performance.

"I went to the International Drag King Community Extravaganza last year and Nappy Grooves blew me away," said Oshima. "They're very committed to fighting homophobia and racism and stereotypical images of black people."

And stereotypical images of those in drag.

The five women of Nappy Grooves, according to member Mattie Richardson, all have different LGBT (lesbian, gay, bisexual, transexual) identities.

"People have done gender performances for a very long time," said Richardson, an English professor at the University of Texas. "But the particular crop of people who call themselves drag kings has gained momentum."

Drag kings have become more and more a fixture in queer performance events. At MIT, Nappy Grooves will tackle issues such as racism and politics through music and play-acting. Richardson, for example, often plays a swaggering black male character who's a womanizer secretly attracted to men.

"Be they straight or gay or trans or bi or whatever," said Richardson, "I think drag is useful and challenging to anybody who is open to questioning gender norms. Anyone who's open will be inspired by our performance."

"Too Hot to Handle," a lecture/demonstration by Nappy Grooves, takes place Wednesday from 7 to 8:30 p.m. at the Broad Institute Auditorium, NE30, 7 Cambridge Center. Free. Go to www.web.mit.edu/arts.
Posted by Monica Roberts at 11:21 AM

Nappy Grooves, they sound really interesting. I'm going to have to look them up when they return to the west coast.

I'll be checking them out if they come to my neck of the woods, too

That's bad-ass, cause you don't find lots of drag kings of color.