sung to the tune of 'I'm Just A Bill' from ABC's Schoolhouse Rock
Music & Original Lyrics by Dave Frishberg
Performed by Jack Sheldon, 1975

You sure gotta climb a lotta steps to get to this Capitol Building here in Washington. But I wonder who that sad little scrap of paper is? 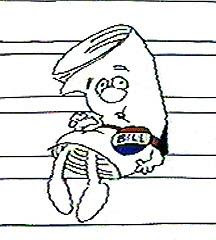 Gee, bill, you certainly have a lot of patience and courage.

Well, I got this far. When I started, I wasn't even a bill - I was just an idea. Some folks back home decided they wanted a law passed, so they called their local congressman and he "You're right, there ought to be a law." Then he sat down and wrote me out and introduced me to Congress, and I became a bill. And I'll remain a bill until they decide to make me a law.


I'm the ENDA bill
Yes I'm the ENDA bill
And I got as far as Capitol Hill
I'm waiting for Congress and Barney Frank
To determine my fate
While gays and trannies
Fight, cuss and debate
Is gender identity in the bill today?
Oh how I hope and pray that it is
But today I'm still the ENDA bill 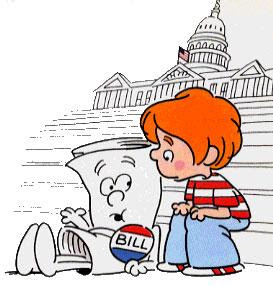 Listen to those congressmen arguing! Is all that discussion and debate about you?

Yes. I'm one of the lucky ones. Most bills never even get this far. I hope they decide to report on me favorably, otherwise I may die.
Die?
Yeah, die in committee.

Oooh! But it looks like I'm gonna live. Now I go to the House of Representatives and they vote on me.
If they vote "yes", what happens?
Then I go to the Senate and the whole thing starts all over again.
Oh no!
Oh yes!

You mean even if the whole Congress says you should be a law, the President can still say no?

Yes, that's called a "veto". If the President vetoes me, I have to go back to Congress, and they vote on me again, and by that time it's...

By that time, it's very unlikely that you'll become a law. It's not easy to become a law, is it?

No, But how I hope and pray that I will
But today I'm still the ENDA bill
Posted by Monica Roberts at 3:45 PM