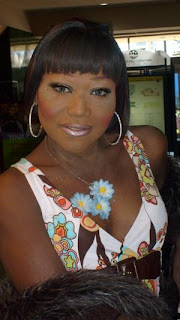 “Pride means being myself. I am proud and happy of who I am,” ----Ebony Lane.

For over 20 years, Ebony Lane has been a staple in Los Angeles’ Crenshaw District. Known for her impeccable fashion, Ebony has been sharing her sense style with women at the Baldwin Hills-Crenshaw Plaza in the heart of the African-American community for over a decade.

Ebony Lane is one of the principals behind “Color Me Beautiful,” a kiosk in the Baldwin Hills-Crenshaw Plaza located in front of Radio Shack on the first floor that features the Patti Labelle make-up and perfume line. On just about any day of the week, it’s here that you can find Ebony with a line of customers waiting to get their eyebrows arched or face made up. Ebony’s customers are faithful. They don’t want any of the other employees to work on them, they come specifically to see Ebony.

But Ebony wasn’t always the woman she is today. Ebony was born José Brown.

Originally from Panama, José came America with his family when he was just 8 years old and in his late 30s José decided that it was time that his inside feelings should match his exterior and became Ebony Lane.

Fluent in both English and Spanish, Ebony says that when she was José, she would always get teased for being gay but that when she made the switch to Ebony that all stopped.

Known in the community for doing flawless make-up, Ebony Lane is one of the most sought after drag performers in the country. In addition to working at the mall, Ebony takes the time to host balls, events where several times a month, predominantly Black and Latino gay social groups (called houses) get together and compete in a variety of categories. Today’s balls have been traced to the Harlem Renaissance in the 20's where in the midst of the flourishing Black nightlife and culture, the underground lesbian and gay experience was usually celebrated at lavish and grand costume balls, where men were often dressed as women, and vice-versa.

“I throw balls because at 55 years old, I have seen and been through a lot, some good, some bad,” commented Ebony. “If I can do anything to develop a sense of pride in young Black gay men so that they can lead healthy lives and realize that they can be and do anything they want, then I am going to do it.”

Besides working and performing, Ebony is married and is currently raising two adopted children with her husband. In addition, she attends Unity Fellowship Church, a Black church known for being accepting of lesbian, gay, bisexual, and transgender people.

“I found a church where I am accepted for me and am not being watched and ridiculed and for me, that is priceless.”