A View To A Protest 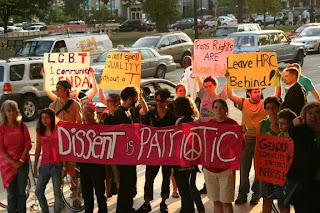 Got back a few hours ago from my business ttip to Washington DC protesting the HRC national dinner.

These are Vanessa Edwards Foster's observations of the HRC protest.

I've been an activist for a long time, but believe it or not that was my first protest.

I left The Ville with AC at 6 AM and literally got dropped off on the steps of the convention center at 4 PM wih signs in hand while AC parked the car. We spent the next three and a half hours engaging HRC dinner attendees, various citizens, and attendees of other conventions talking place the same day at the convention center. 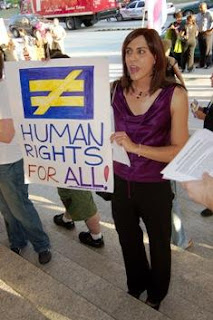 I spent most of the protest laying out the history to young transgender people, curious convention center employees, passerbys and explaining why we were there. I pointed out that the battle over HR 2015 is not just a transgender issue. I gave numerous examples of why it was important to have 'gender identity' in ENDA.

Without 'gender identity' in ENDA, it's a worthless piece of paper. Lambda Legal has said as much. Frank's Folly (HR 3685) not only doesn't cover us, it won't cover 90% of the GLB population or straight people. We all know women who have masculine body builds and upper lips they have to ruthlessly wax and shave and uncles who are slight of build and femme looking.

I also threw an occasional sarcastic comment or two into the chant mix.

I had a wonderful conversation with James, a gay man who exemplifies HRC's dilemma. Basically the young GLB people have interacted with transgender people their whole lives. The problem is the Mattachine gays who run HRC right now disproportionately come from my generation and hate transpeople.

I enjoyed the conversations I had with straight folks as well. Some absolutely get it. It's too bad that some of the peeps inside the Washington Convention Center that night and a purple congressman from Massachusetts don't.
Posted by Monica Roberts at 11:36 AM