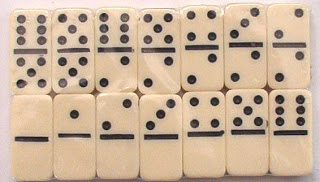 One of the things I miss about home is sitting down with a group of my friends and playing dominos.

Dominos is as much a part of African-American culture in Texas as strawberry soda, barbecue, football, and Juneteenth. I first learned how to play the game watching the seniors in my old Sunnyside area barbershop. They would be there for hours even after they'd gotten their hair cut playing and talking trash to each other.

My barber Charlene Washington taught me how to play. I wasn't in a hurry to go home after she cut my hair one hot summer afternoon and she needed a partner to help her whip up on some trash-talking old men. Once I figured out the rules and strategies involved after a while I became as lethal as she was. 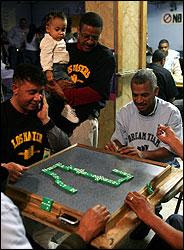 The game starts after the dominos are shuffled and all players select seven dominos to make up their hand. The person holding the highest double domino starts the action. That domino becomes the 'spinner', the only one you can play on four sides. Every other subsequent play in the game you have to match one of the dominos on the open ends with play proceeding to the right.

If a person doesn't possess a domino that will match any of the open ends they are passed or as we called it 'knocking'. First player to get rid of all their dominos wins the hand and the process starts all over again until they reach the target score.

Scoring is done in multiples of 5 with the maximum for one play being 30 points if you're playing with a Double Six domino set.

I understand Latinos and peeps in the Caribbean are as crazy about the game as African-Americans are. Some have elaborate tables made specifically for playing the game with cupholders built into them to hold drinks. 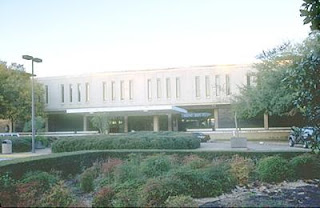 During my freshman year at the University of Houston me and my running buddies discovered one day when we didn't have the funds to bowl that the UC had a set of dominos we could check out to play. For the next three years we got a group together on a regular basis and started playing dominos on our lunch periods, some early mornings before class and sometimes after class.

And what entertaining games they were. We took trash talking to a new level when we playing. It got so raucous sometimes that we had other UH students watching our antics.

Of course, you know yours truly and her friends would come up with creative monikers for our domino games. I called all-out scoring in which points were scored in escalating fashion up to the big 30 point play 'Run and Shoot dominoes' after Mouse Davis' high-powered high scoring football offense. 'Four corners dominoes' was what I called it when somebody tried to limit scoring and 'lock up' the hand.

When it was your turn to shuffle the dominoes for the next game it was called 'washing the dishes'. Sometimes one of my friends would mimic pouring dishwashing soap into the mix or make pithy comments after selecting their domino hand like 'I can see myself' after the Joy diswashing liquid commercial of the early 80's.

There were people like Craig and Raymond Jolivette who liked to add to your embarrassment after a loss and make you sign the score sheet after they beat you. They would write, "I got my azz thoroughly kicked by Craig and Raymond at the bottom of the page and make you and your partner autograph it. Of course if they lost, they had to eat crow and do the same thing. 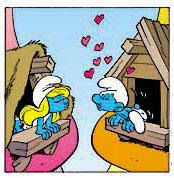 Raymond Jolivette was definitely the most entertaining one of our bunch. He graduated from Smiley High and arrived at UH in the fall of 1981. He earned the nickname of 'Smurf' from us because of his 5'5" height and after the popular cartoon of the time.

He took the nickname and ran with it. His 5'1" Black Filipina girlfriend Victoria was called 'Smurfette' by us and he was a fun person to be around. I'm still telling Raymond Jolivette stories to this day.

There was one game we were playing in which I made a boneheaded play that was not only going to result in me and my partner suffering a thirty point blow, but cost us the game as well. Raymond took the scoring domino out of his hand, went to the back wall of the UC pool room where we were playing, ran to our table hollering 'Banzai' all the way before slamming the domino onto the table to heighten my embarrassment.

Ah, those were the days.
Posted by Monica Roberts at 2:06 PM

Do you know I actually saw them playing 'bones' on ESPN once. I know it's a fun game but is it a sport? (lol)

I've played once or twice. It's a lot of fun as long as you are not playing with people who are too serious and get mad. I feel the same about certain card games like spades.

I've seen people almost get into fights over dominoes.

Nope..It's not a sport. But there are some people that take any game too seriously.