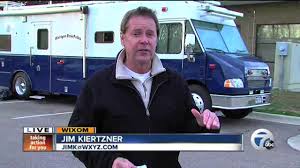 When I took a trip up to Boston recently for the National Association of Black Journalists convention to discuss the coverage of Black transwomen, one of the things I implored them to do was make sure they got it right the first time because white run media consistently screws up when it coves to covering us.

And right on cue, thanks to Can We Talk 4 Real  podcast host 'Michelle Brown bringing it to my attention, here's another example of messed up media coverage courtesy of WXYZ-TV and reporter Jim Kiertzner..

In the process of reporting on a string of attacks on trans women in Detroit's Palmer Park, one fatal, Kiertzner got it horribly wrong.

Let me do your job for you and write the story properly before I put you on blast for failing to read your AP Stylebook.

(WXYZ) - Detroit Police say they are investigating three hate crimes that may be related.

All three targets were transgender men women. One was killed in Palmer Park last Friday.  In that case, the killer drove off, crashed into another car and ran away on foot, but a gun was left behind.

Another shooting on Sunday and another last week were not fatal, but the victims were also transgender men women. Police are not releasing any identities of the victims.  No one is in custody but police say they have a person of interest.

Palmer Park is located along Woodward Avenue between 6 and 7 Mile.    The area east to John R and up to 8 Mile is also a well known Detroit "red light" district.  Many in the LGBT community live here and some work the streets for sex.

For now, in this area, a killer is on the loose.

Now, let's get to discussing the problematic August 20 video report.    Jim, a male to female transperson is a transgender woman, NOT a 'transgender man'.   You also use FEMININE pronouns when referring to that person.

And using 'lifestyle' in the context of a report on a transgender person is problematic and offensive.

But you would have known that Jim had you referred to the AP Stylebook, The National Gay And Lesbian Journalism Assn (NGLJA) guide or GLAAD's guides

The way this story was reported was not only confusing to those of us in the trans community and our allies, but has raised questions of just how committed you and your station are to respecting the humanity of transpeople and reporting accurately on our lives.

This won't be the first or last time you encounter trans people in the Detroit area.  Past time for WXYZ-TV and other Detroit media outlets to get it right in reporting on us.

TransGriot Update:  Looks like the story has been cleaned up to remove the misgendering language.
Posted by Monica Roberts at 10:30 AM