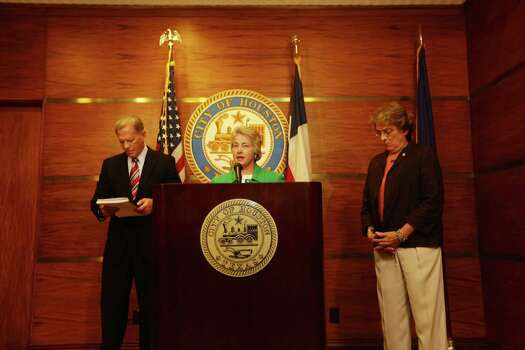 The big story yesterday was the failure of the HERO haters to get the 17,269 signatures they needed to force the Houston Equal Right Ordinance onto the fall election ballot.

The haters only gathered 15,249 valid signatures.  They probably had more, but thanks to their own sloppiness and failure to follow the law, many of their petition pages were invalidated.

They can hate the process and blame Mayor Parker all they want, but if they want to know the major reason why their recall petition drive failed, they can look in the mirror.  As far as I'm concerned, no one's civil rights should be placed on a ballot for an up or down vote.

Because the press conference was held at 5 PM, it was the lead story on all the local news channels.

About an hour later the Forward Times political forum talking about the HERO kicked off at the CWA union hall with 60 people in attendance.  It was interesting to note that HERO opponents Max Miller and Kathy Bluefield-Daniels, who were supposed to be on the panel, no showed.

Darn, was looking forward to tangling with her and especially Max Miller's sellout behind..

Councilmember Dwight Boykins was there along with a rep from Mayor Parker's office who were asked questions by moderators Jeffrey Boney and TaShon Thomas before the forum was opened to questions from the audience.

Eventually one of the HERO haters, Pastor James Nash of St. Paul Missionary Baptist Church did show his face in the place, but HERO opponents were definitely outnumbered by HERO supporters.

When Pastor Nash tried to play the sexual predator card mere moments after being told by Cassandra Thomas, a 30 year expert in the field, that the anti-trans bathroom predator scare tactic they repeatedly used in this HERO fight is false, he got smacked with the fact that many of the sexual predators we hear about in the news are his fellow clergy.

So stop projecting Pastor Nash, and give that discredited transgender bathroom predator lie a rest. .

It was another huge win for Team HERO, but the haters are not going to give up.

Once again, if you anti-HERO peeps have problems with me calling you haters, until you stop working with Dave Welch and other white conservafools to openly oppose my human rights, I'm going to keep calling you exactly what you are:  Haters.

I have zero respect for anyone who works to repress the human rights of someone else.  It's even more distasteful to me when they try to justify their anti-TBLG bigotry by using Bible scripture or your pulpits to do so and colludes with white conservative Republicans.

The Houston African-American SGL, bi and trans community will have another strategy meeting August 12 at the Montrose Center.  This one will take place at 7 PM and will discuss our next steps in defending HERO and what we need to do in our ongoing efforts to reverse the damage caused to community unity by the hate preachers lies..

The fight to keep the HERO continues.