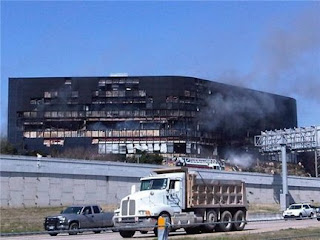 One of the things I've been pondering since the attack on the building in Austin housing the IRS is this question.

Why is it that when Maj. Nidal Malik Hasan killed 12 of his fellow soldiers and wounded another 31 at Fort Hood back on November 4, the T-word came out with no hesitation and the obligatory slamming of Islam soon followed?

But flip the script and you have a white male burn his house down, leave an anti government manifesto on the Net, and dive bombs a plane into a federal building housing the IRS, or another white male in 1995 instigates the destruction of another federal building in Oklahoma City, the MSM twists itself into a pretzel to avoid calling it a terrorist attack or say it's the work of a lone individual?

To delve further into Bizarro world, the same conservapeeps decrying the foiled Christmas underwear bomber and giving the president 'soft on terris' grief on it are calling this vanilla flavored one a hero.