30th Anniversary of The 'Miracle On Ice' 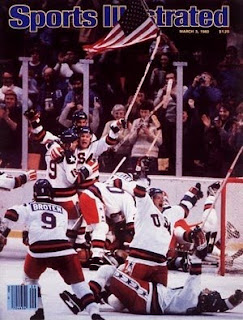 Do you believe in miracles? Yes! Al Michaels, February 1980


It's fitting that we are in the midst of a Winter Olympic Games being held on the North American continent as the 30th anniversary of Team USA's improbable February 22, 1980 Olympic hockey victory 4-3 upset victory over the Soviet hockey team is being celebrated.

I was a few months from graduating from high school when I arrived home from tennis practice and was informed by my mother that the United States had beaten the Big Bad USSR in Olympic hockey.

To grasp the magnitude of that win, as part of its 100th anniversary celebrations in 2008, the International Ice Hockey Federation (IIHF) picked the Miracle on Ice as the number-one international hockey story of the century.

Bear in mind that this was a semifinal medal round game. Team USA still had to win the game against Finland to secure the gold medal.

This was also the same USSR team that embarrassed Team USA in a February 9 game at Madison Square Garden 10-3.

But what a difference two weeks makes.

It's 30 years later and I still get goosebumps watching that game.
Posted by Monica Roberts at 11:01 AM