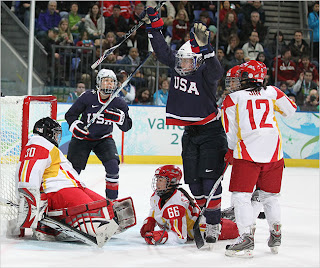 The back to back world champion and number one ranked Team USA played their first game in this 2010 women's Olympic hockey tournament versus China.

Team USA unleashed 61 shots on goal and took a 5-0 lead after the first period concluded enroute to tying an American Olympic record with their 12-1 victory.

The game was played in front of a flag waving crowd that included Vice President Joe Biden and his wife and 1980 USA Olympic hockey captain Mike Eruzione.

Jenny Potter scored three goals in only 22 minutes to become the all time leading scorer in US Olympic history male or female.

“You don’t ever like to beat a team, 12-1,” Natalie Darwitz, the American captain, said, adding, “I think we got a little sloppy there in the middle and the end. It’s kind of a tough game when you’re controlling the play and it gets to be about goals and points. You get away from doing the little things.”

Team USA's next Group B game will take place on Tuesday against the Russians, who lost to Finland 5-1 in their opener.

One down, four to go
Posted by Monica Roberts at 7:47 PM