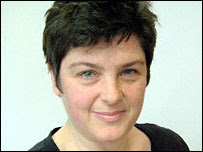 Mary Daly is no longer walking this planet, but fear not, her transphobic radical feminist replacement is on the case.

Julie Bindel is spreading lies and disinformation about trans peeps and sitting in vanilla flavored privileged judgment of our lives.

Like Janice Raymond, she gleefully wallows in transphobia and advocates that biology is not destiny unless you are trans.

Real nice words coming from a lesbian. The oppressed now becomes the oppressor.

Bindel has the nerve to whine that trans people are stifling her free speech. Yeah right. Free speech has consequences, Mary Daly for the New Millennium.

Did you actually think transpeople were just going to sit in a corner and sulk while you spewed forth transphobic rants and insults with impunity?

Um no Miss Deluded Thang, unlike the Disco Era where our voices were drowned out by the trans hatred chorus of Daly, Greer and Raymond, new decade, new rules.

We can and will hit back just as hard.

Besides, as a minority, I know all too well that hate speech such as Bindel's must be called out as early and forcefully as possible, not greeted with silence.

And it's past time that Julie Bindel be called out for her transphobia, not excused for it.
Posted by Monica Roberts at 3:30 PM