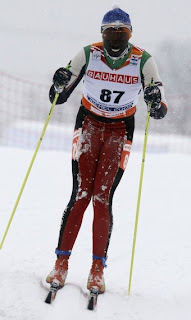 Three time Olympian Philip Boit had hoped to close out his Olympic cross country skiing career in Vancouver. Unfortunately he fell a heartbreaking two points shy of making it happen.

Philip Boit is the first Kenyan to compete in the winter Olympics and is the 38 year old nephew of Kenyan running legend and Olympian Mike Boit. Mike Boit was the 800m bronze medalist at the 1972 Munich Games.

Boit like his uncle was a middle distance runner but switched to cross country skiing and began training in Finland. In 1996 Nike began sponsoring him and he qualified for the lone 1998 Nagano Olympic spot available to Kenya for the 10k classic field. 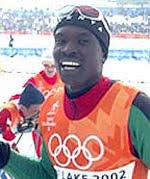 He garnered international attention as the first Kenyan winter games athlete but finished 92nd and last in the 10K classic.

Gold medalist Bjorn Daehlie of Norway delayed his medal ceremony in order to greet Boit at the finish line with a hug. Boit was so moved by the gesture he named one of his sons Daehlie after him.

Nike dropped their sponsorship after the 1999 Nordic World Championships, but Boit continued to compete. He did dry training for two years in Kenya and qualified for the 2002 Salt Lake Games. His results were better in these games, finishing 64th in the sprint race in front of three other competitors and retired when the Games concluded. 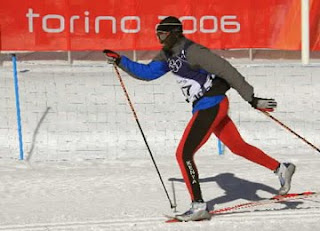 The retirement was short lived and once again Boit put on his cross country skis to compete in the 2006 Torino Games. He once again finished 92nd in the 15k class race, but ahead of five other competitors.

He stated during a 2006 interview that Vancouver would be his last Olympics. But in the run up to Vancouver the International Ski Federation or FIS decided to tighten the qualifying standard from 500 points for the 15k sprint race to 300.

Boit did his best to make the new FIS standard. He had to battle visa restrictions, long expensive travel from his Finnish training area back home to Kenya, broken poles, drastic acclimatization, and illness but still managed to bring his FIS point rating down from 526 to just two points shy of the new standard.

But it wasn't good enough. 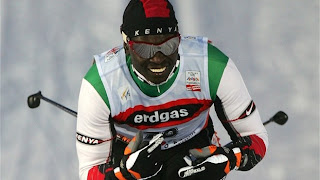 Boit will consider closing out his cross country skiing at the Nordic world championship, but it's a heartbreaking end to the Olympic career of a pioneering athlete.
Posted by Monica Roberts at 11:01 PM