Super Bowl XLIV will be kicking off in Miami this weekend between the Indianapolis Colts and the New Orleans Saints, an I'll be parked in front of the TV watching it along with a few friends.

I'm torn on two levels for this game as to which team I'd like to see win it. Indy has a brother coach in Jim Caldwell, and although I can't stand them since they are in the same division with my beloved Texans, I'd like to see Jim make history.

Then there's the Saints, my other fave NFL team. It's not only their first Super Bowl after 43 years of football frustration, they are playing for a city that is still trying to recover from the devastation Katrina wrought in 2005. If there's ever been a city that deserves a NFL champion, its New Orleans.

We'll see on Sunday who wants it more.

And now it's time to see what fool, fools or group of fools exhibited championship level stupidity this week.

As always, there were many worthy contenders this week, and some I can count on with nauseating regularity to do so. 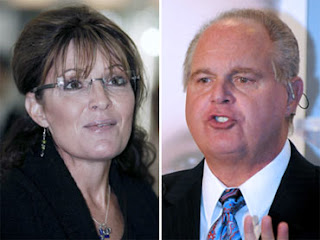 This week's Shut Up Fool Award Winners are Rush Limbaugh and Sarah Palin.

After Palin goes on a politically motivated rant demanding that White House Chief of Staff Rahm Emanuel be fired for the use of the word 'retard' back in August, and exploiting her disabled child once again, Rush turns around and not less than 24 hours later uses it multiple times in commentary on his radio show.

It is pointed out by Keith Olbermann on 'Countdown' that Texas Governor Rick Perry's campaign manager Dave Carney also has used it along with Glenn Beck.

Did Sarah call for her fellow Republicans to be fired from their various positions?

Is Sarah Palin still the governor of Alaska?