Six Is The Magic Number For Team USA Olympic Hockey 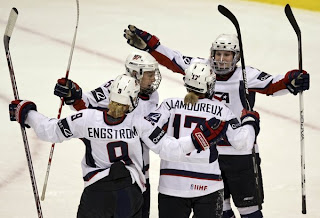 Both the Team USA men and women stayed perfect in Olympic today by scoring six goals in their respective pool play hockey games.

The Team USA women scored four first period goals enroute to a 6-0 shutout win Thursday over Finland at the UBC Thunderbird Arena. It helped Team USA clinch the top spot in Group B and put them in the medal round.

They will face Sweden on Monday at Canada Hockey Place with a chance to gain redemption. The Swedish team shocked the women's hockey world in 2006 by derailing the expected gold medal hockey showdown between the USA and Canada by upsetting Team USA 3-2 in a shootout.

It's obvious from the 13-1 shellacking Team Canada put on them Wednesday that this is a far different Swedish team than the Torino bronze medalists. 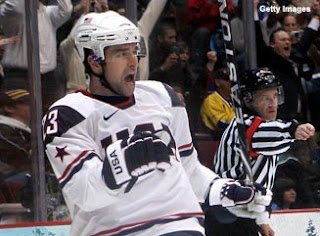 But anything can happen when you play the games, and it's still too early to count gold medals before they're awarded.

Over at Canada Hockey Place, the Team USA men also scored six goals in their 6-1 Group A victory over Norway.

Their next game promises to be much tougher since it will be a Sunday showdown against Team Canada that will decide who wins Group A. The Canadians warmed up for the showdown by taking a hard-fought 3-2 shootout win against Switzerland.

We'll see if both the men's and women's teams will have golden results.
Posted by Monica Roberts at 10:00 PM