This Time It's For The Gold Medal 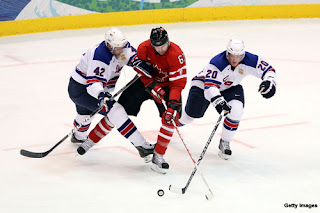 It's hard to beat a team multiple times in any sport, but that's what Team USA's men's hockey team will have to do today if they wish to return to the States with a hockey gold medal for the first time in 30 years.

The Hockey Border War between the United States and Canada will kick off again at 3 PM EST. It's not only a rematch of the preliminary round game the US won last Sunday 5-3, it's also a rematch of the 2002 gold medal game in Salt Lake City that the Canadians won 5-2.

Team USA scored early and often in their semifinal game versus Finland Friday and made those goals stand up for a 6-1 victory.

Ever since that 5-3 preliminary round defeat the Canadian men have been on a roll themselves with victories over Germany, Russia and Slovakia.

They also have the pressure of an entire nation on their backs as well.