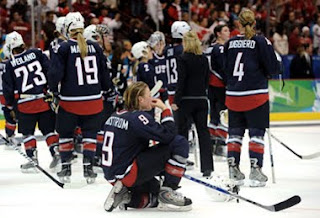 Renee is happily drinking her green tea this morning instead of crying in it like she was Monday because the Canadian women did something their male hockey playing counterparts haven't been able to do in these Olympics so far:

They parlayed two early first period goals by Marie-Philip Poulin and the goaltending of Shannon Szabados into a 2-0 win for gold. Szabados stopped 28 shots to help Team Canada win their third straight Olympic gold medal and rack up their 15th straight Olympic win.

While Team USA did walk away with silver medals, it's one of the times in the Olympics when you aren't happy about it. When you lose to your bitter rival, it's even worse. 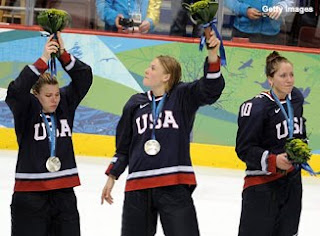 “Szabados played out of her mind,” Monique Lamoureux said. “It’s never fun to lose, especially in a championship game.”

“When you give your whole life to something and you come up short, as a team, it’s just awful,” four time Olympian Angela Ruggiero said while choking back tears. “It’s a little different than playing on the men’s side. You really give your life to it. You make lots of sacrifices to win the gold medal.”

Well ladies, you played your butts off to be so young. There were 15 Olympic rookies on that squad and you're still the two time world champions.

All Olympic sporting dynasties end sooner or later. The Canadian women will eventually lose an Olympic hockey game. Just get 'em in Sochi in 2014.

Assuming the IOC doesn't end women's Olympic hockey because Canada and the USA are dominating it right now.
Posted by Monica Roberts at 8:28 AM