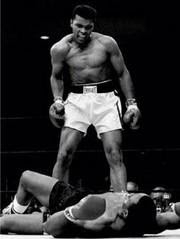 Today is the 65th birthday of 'The Greatest'. On this day Cassius Marcellus Clay, the man who would become an inspiration to millions and a symbol of Black Pride was born in Louisville.

The self proclaimed 'pretty' man in 1960 won Olympic gold in Rome, then shocked the world twice. He beat Sonny Liston for the championship in 1964, then joined the Nation of Islam and changed his name to Muhammad Ali. He was a rare blend of lightning quick speed, punching power and unabashed showmanship. The boxing world had never seen anything like him and frankly hasn't been the same since he left. He was also a proud, principled man. He refused induction into the Army during the height of the Vietnam War, an act that cost him his title and three precious years of his boxing career.

Ali's body has been ravaged by the effects of Parkinson's disease, but all of us who had the pleasure of growing up during his heyday and watching the epic 'Thrilla in Manila' with Joe Frazier, him rope-a-dope the then-invincible George Foreman to regain his crown for a second time in 1975, defeat Leon Spinks to regain his crown for the third time in 1978 and his verbal jousting with Howard Cosell will never forget it.

He brought tears to my eyes when I watched him along with the rest of the planet light the Olympic flame during the opening ceremonies of the Atlanta Games in 1996.

He will always be 'The Champ' to me.
Posted by Monica Roberts at 5:05 PM

“a symbol of Black Pride”

No offense intended, but I’m not a believer in black pride or pride in any other skin color.

Years ago I read a science fiction novel, Gods of Riverworld by Philip jose farmer. The cast of characters is extremely diverse: from all times and all parts of the world. (it IS a science fiction novel after all.) A black character is going on about “black pride” and a Chinese character makes the point that one should be proud of being a good person, not one’s skin color.

It's funny you insult the man, then have the nerve to post 'respectfully submitted.'

"you insult the man"
I don't insult him. I don't see him through rose-colored glasses.
he made mistakes in his life, one of which was joining the racist group "nation of islam."
another was becoming an activist against the vietnam war.