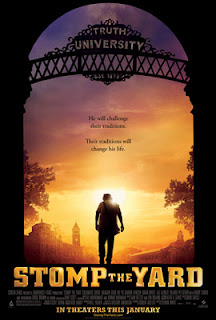 Last night I went to see Stomp The Yard at my local multiplex. Since I have more than a passing interest in step shows being the child of a sorority member, I wanted to see if the filmakers accurately captured the flavor of African-American fraternity life.

Boy did they ever.

While I wasn't enamored of the opening gangsta step sequence, I definitely got into the rest of the movie. Seeing Harry J. Lennix and Valarie Pettiford in the movie was a bonus.

One sad note about the movie for me. I noticed during the scene in which TNT was practicing their step show routine, they were in a gym that had MBC painted on the bleachers. That's when I snapped to the realization that some of the scenes for the fictional Atlanta-based HBCU called Truth University were filmed on the Morris Brown College campus.

It took me back to my own UH college days. Remembering the step battles that happened at the North Texas Greek Show and various other local step shows at TSU, Prairie View and UH. There was the on-campus Hateraid between the Que's and Kappas that I observed the first week I was on campus that provided a constant source of amusement for me.

Wednesdays and Fridays were the days that all the African-American frats and sororities stood their pledges in front of the UC for inspection by their big brothers and big sisters. The Omegas after checking out their pledges would have them jog through the Kappa pledge line to break it up and dare them to do anything about it. One day they pushed it too far and the Kappas retaliated. A Kappa Kane was swung at the tail Que pledge in line and he fortunately ducked in time. A Que who was 6'5" and worked as a bouncer at a new wave nightclub snatched that inch thick cane and broke it into four pieces with his bare hands as his brothers chanted, "Shook, shook, shook, got yo' cane took."

But back to the movie. Awesome step sequences, the old school-new school drama, conflicts between rival frats that play out over generations, a great love story, with power plays and secrets that ruined and have the potential to ruin lives play out as this movie unfolds. It also has a neat sequence in which points out the fabulous leadership and service heritage that African-American fraternities and sororities have provided for our people.

It's definitely getting added to my DVD collection when it comes out.
Posted by Monica Roberts at 12:03 AM

Thanks for the info on this movie. I love the frat and dorm house stepping. I remember homecoming at Clark Atlanta and the stepping was amazing.

That it is. Stepping also has links to our African heritage as well.

I loved the scene in Heritage Hall with all the pictures of famous frat and sorority members with the caption underneath it that said,