What the people want is simple. They want an America as good as its promise.
Barbara Jordan. Harvard University Commencement Address, June 16, 1977


Barbara Jordan for me is my personal definition of the best qualities of a politician. Smart, humble, eloquent with rock solid ethics and integrity.
It's the vision of leadership I take into the voting booth in every election and strive to live up to in my own life. Her legacy is so powerful even after her death that many Houstonians still consider the 18th Congressional District 'Barbara's seat.'

Barbara Charline Jordan's life was a groundbreaking one. It took the Phillis Wheatley honors grad from the Fifth Ward to Austin to Washington DC and back. As a Texas Southern University student she participated on the first debate team from an HBCU to compete in the forensic tournament held at Baylor University. She won first place in that competition and honed those oratory skills that would define her life in public service.

When the 18th Congressional District was created in 1971 she was overwhemingly elected to that post in November 1972, becoming the first African-American congressmember from Texas. As a member of the House Judiciary Committee her stirring words during the 1973 Watergate Hearings garnered her national and international acclaim. She decided not to seek reelection and left Congress in 1978. 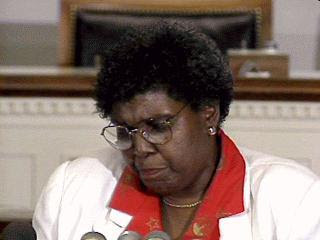 For the next sixteen years she taught at the University of Texas, wrote and spoke about critical issues facing Americans and gave memorable keynote speeches at the Democratic Conventions in 1976 and 1992. The 1976 speech was another trailblazing moment. It was the first time an African-American had ever given a keynote speech at a party convention.

In 1991 Governor Ann Richards appointed her as Special Counsel for Ethics and in 1994 she served as Chairwoman of the United States Commission on Immigration Reform. She was awarded the Presidential Medal of Freedom by President Clinton in 1994.

Even in death, she was a trailblazer. She became the first African-American honored with burial in the Texas State Cemetery, our Lone Star version of Arlington National Cemetery.

I'd love to be half the woman that Barbara Jordan was. I'm still working on it. ;)
Posted by Monica Roberts at 12:00 AM

I absolutely loved Barbara Jordan. She was an electrifying orator and a brilliant woman. Thanks so much for this post.

Yeah, it's too bad we don't have more politicians like her.