The Lady In Red 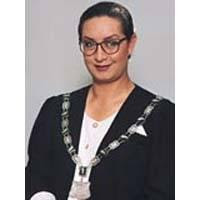 From the New Zealand Herald
Sunday December 24, 2006
By Leah Haines

It's never been easier to convince an MP to pose in front of Parliament.

With a flick of her multi-toned locks, Georgina Beyer, the world's first transsexual MP, has flung herself eagerly at the stone plinth above which Prime Minister Richard Seddon stands immortalised in bronze.

She leans into King Dick's leg, her teeth quickly licked of any vestiges of lippy and, hands on hips, eyes fixed with that kissy-kissy stare, pouts into the photographer's lens.

Suddenly - "How's this?" - she whips her fur-lined jacket open to reveal a to-die-for figure in elegant black, draped with chains of faux gold and garnet-coloured gems.

"When it comes to cameras, once a queen..." Beyer winks, then sinks into the fox fur trim with a giggle.

Beyer is heading for the old stage lights again after announcing she'll quit next February after seven years in Parliament to take up a role in Christchurch's Fortune Theatre.

The MP has twice before been stopped from quitting by the most unlikely of folks. In 2002, 60 Grey Power members from Dannevirke talked her around. Then three years later Brian Tamaki marshalled his homophobic troops to Parliament. "How could I leave now when the spectre of that is on the horizon?"

After nearly 50 years - as a boy, prostitute, stripper drag queen, actress, mayor and MP, she reckons she has two or three careers left in her. Of Parliament, she's had her fill.

"We deal with the most grave matters of the nation," she says. "And for a bit of a slapper from Vivian St like me, you know, wow! That's a bit of a learning curve! And strangely enough at the end of the day, I see so many similarities between politics and prostitution, especially when it comes to election time, you know? I mean what the hell are we soliciting for?"

Plans for her valedictory speech outfit have begun. "Something glammy," she muses, because the cameras might come to such an important event.

"Oh, you doooooon't want my Christmas day story," she moans.

Loved as a queer icon and adored as a hero by human rights activists, Beyer will more than likely spend Christmas tomorrow alone, at home, in the tiny hamlet of rural Carterton.

Her aloneness is a necessary escape from the people she spends "99 per cent of the time with", she reckons. "That's part of the job. It's work. It's 'You're on' - the price of fame and notoriety."

But the microscope of politics has played havoc with her private life.

"I haven't had the emotional support (others have) by way of a home life or anything like that. I've had to deal with this entire 14 years of my life, as far as that's concerned, alone.

"Yes, I've had support from friends, but many of them have dissipated because you just can't unload on people about stuff. It ruins your personal social life quite dramatically."

Beyer says her aloneness is where she finds her inner peace.

"Relaxation for me is just being at home," she continues. "I don't host Christmas dinners and I'm not very good at wanting to go to others' Christmas meals and things because it's all terribly family and terribly close and I," she pauses, "I just don't fit into that very easily, seeing as I don't do my own."

Her mother is dead, she has nothing much to do with her biological father whom she met for the first time in her mid-20s. She has never met her brother Andrew's wife or children.

Perhaps they're proud of her? "They're probably pissed off that I did so well with myself. It was more convenient to think badly of me when I was a prostitute on the streets or just a drag queen in a drag show or something like that. But then, yes, that'd be having to acknowledge that I'm," and she pauses for dramatic effect, "the only MP in our family."

Beyer hates talking about her family. People have no right to know about "all the deep bitterness and pain and stuff like that".

Was she helpfully shuffled from Parliament by Prime Minister Helen Clark? "No! I would like you to state categorically no one, nothing, but myself has purchased me out of here. I'm the one that's made the decisions."

What are her thoughts on shelving her Gender Identity Bill - which would have enshrined in law the right of transgender and other people to be covered by the Human Rights Act?

She rolls her eyes and says: "There is a prudent time to pull back, you know." Labour had just passed the Civil Union Bill and legalised prostitution. The public didn't have an appetite for more social liberalisation.

A Crown Law clarification was tabled which affirmed that gender identity was covered in law. That achieved what she had wanted so, she reckons, why push the country's tolerance any further?

"And did I want to put myself, my supporters, the queer community and the transgender community through a venal vicious debate which I wouldn't have won?

"I did not have the numbers in this particular term of Parliament to affirm that bill going through. And for what? For nothing. And we would never touch it again for 20 years. Nothing like that would ever come up again, I betcha."

Though she's never experienced overt rudeness from her colleagues, except perhaps from former National MP Brian Neeson - "He used to get a bit huffy puffy but he doesn't count. A terribly conservative man" - she reckons most quietly respect the enormity of her journey to Parliament. Nevertheless she considers herself an outsider.

"Of course I'm a misfit. I'm a first in the world. I'm a transsexual. Okay? And that puts me on the edges of society to begin with. I'm not the only one. But in this particular game I was the only one and I walked into the world of international politics famous, in political circles.

"Can you imagine the scrutiny of that? I've had to mould myself down into something more acceptable in presentation, in the whole public life situation that I lead, ensuring that my behaviour will always be of dignity and integrity and sincerity, knowing that people are going to be uncomfortable in some forums that I am a transsexual. I meet people from countries where the death penalty applies to same sex anything. And, while I may have my opinions, I have to temper them in those forums.

"However, I never fail to state in my public addresses when talking to international forums that I am a proud New Zealand transsexual member of Parliament," she stiffens in her seat, breathes through the nose and smiles. "To reinforce that I have had a fantastic opportunity to up the visibility of significant minorities. I'm proud of my country and everything that's enabled me to be who I am and do what I do. So I've been a misfit in that sense, but in the happiest of ways."

Next on the agenda is very likely to be a serious tilt at the Wellington mayoralty. At the moment Beyer is all diplomacy and "maybes" about the possibility of putting up her hand later next year.

But she is already talking vision and leadership for the Capital - positioning herself as both the vivacious cheerleader and experienced chairwoman.

Her last tilt at the mayoralty in Carterton 1995 was funded by her last stint on the stage - playing a transsexual shearer.

So how did an over-the-top transsexual former streetwalker win the hearts of conservative rural New Zealand? "Oh, just seriously straight-up-ness. I was out. There was nothing not to know about me. I never hid for one moment who I was and the background I came from so they knew. They knew.

"Sonya Davies summed it up in the documentary about me. This old bugger from out of Dannevirke who'd voted National all his life said: 'But not this time. This time I'll be voting for that Georgina Beyer because she's a good chap'."
Posted by Monica Roberts at 2:20 PM