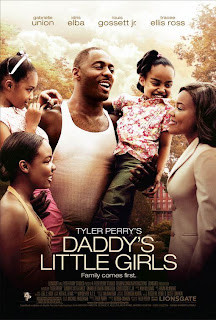 I have a confession to make. I'm a serious movie junkie.

If the premise of a movie intrigues me I won't hesitate to head to the local multiplex to check it out on the first weekend it opens. When I get there I'll buy a large tub of buttered popcorn, a large drink and contentedly munch away as I enjoy the show. If I'm not feeling the plot synopsis that's when I'll wait until it hits DVD. (and it won't be a bootleg DVD either).

I love movies with great plots, realistic characters, and a compelling story. Hey, I'm a writer. That's what I like in a movie and I believe that what's been missing in a lot of films lately. A bumpin' soundtrack doesn't hurt either. I also like romantic comedies, action films, sci-fi, some musicals and a good documentary from time to time.

The plot centers around Julia, a successful attorney played by Union who falls in love with Monty, a financially challenged mechanic played by Elba. They are introduced to each other when the mechanic's ex-wife with gangsta boyfriend in tow suddenly reappears in his life and threatents to take away their three daughters. He needs legal represenation fast and he's introduced to her by a friend who works for Julia.

I've liked the trailers I've seen for this movie so far. This will probably be another hit for Tyler Perry. It's also the first film he's produced that won't have Madea in it. The film was scheduled to be released on February 14 but I'm now seeing February 23 as a release date for it.

In any case, whether it's on Valentine's Day or sometime before or after that date, I'm still looking forward to seeing it.
Posted by Monica Roberts at 1:32 PM