Disrespecting My Race Is NOT Okay 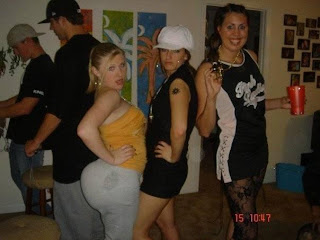 And whites... I'd have to say there is still racism in our society and there are still attitudes based on race. Suprmeme Court Justice Clarence Thomas

News flash, people. Race permeates everything in American society. The sooner we admit that the sooner we can all deal with it. Until the white folks who are in denial (and clueless folks like Dinesh D'Souza) buy a vowel and get a clue about that fact we are going to continue to have situations like this blow up.

African-Americans feel that despite the progress that we made during the Civil Rights Movement, under GOP rule this country has reversed course on race relations just like it did after Reconstruction. We are weary of pointing out ad nauseum that we are STILL expericing the aftershocks of slavery's effects on this country and tired of being disrespectfully ignored. We see incidents like the racist parties as a sign that confirms our suspicions that America is indeed backsliding on working toward making Dr. King's dream a reality.

Some whites that I've had the chance to have honest discussions with on this topic over the years feel that 40 years of talking about it and other actions that occrred in the wake of the Civil Rights Movement are enough. Since African-Americans don't face overt racism in many areas of American life they feel that the country has moved beyond it.

One thing that 'errbody' forgets is that chattel slavery in this country lasted for 246 years and Jim Crow racism was around for 100 more. There was a lot of disinformation disseminated to justify slavery that if you're honest about it, reflects itself in today's racial attitudes. It's difficult for some whites to acknowledge that there is a problem with race when they go through life without having to deal with the issue because they're at the top of the societal pecking order.

So if you want to know why we go ballistic when we see those stereotypes acted out at a college party or a white gay man dressing up in blackface and claimong to honor Black women in his act, now ya know.

It's all about respect and right now African-Americans don't feel the love.
Posted by Monica Roberts at 5:40 PM