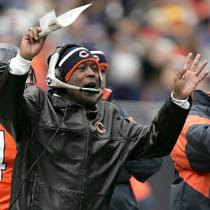 Black History Month 2007 will have a historic matchup kicking it off on February 4.
Super Bowl XLI in Miami will feature two African-American coaches facing off for the NFL championship. One of them will leave Dolphins Stadium with the Lombardi Trophy in their possession.

Lovie Smith's Chicago Bears mauled the New Orleans Saints 39-14 in the NFC Championship game at Soldier Field to make it to their first Super Bowl since the 1985 'Super Bowl Shuffle' squad. He became the first African-American coach to make it to the Super Bowl.

A few hours later Tony Dungy's Indianapolis Colts fought back from a 21-3 deficit to beat the New England Patriots 38-34 on a Joseph Addai touchdown run with 1:00 minute left. A late interception by Marlon Jackson sealed the win at the RCA Dome and allowed Tony Dungy to join his former assistant in making history. Lovie Smith was on (as was Kansas City head coach Herman Edwards) Dungy's staff when he was the Tampa Bay Buccaneers head coach in 1996.

The Colts are playing in their first Super Bowl as an organization since the then-Baltimore Colts beat the Dallas Cowboys 16-13 in 1970. Ironically that game, Super Bowl V was also played in Miami.

The Bears have been the dominant team in the NFC for the majority of the season and had the best record in the league at 13-3. The Colts have struggled with their run defense for most of the year but got their groove back when the playoffs started.

Both men realized the burden they carried as African-American NFL coaches. Art Shell and Dennis Green paved the way in the modern NFL era in terms of breaking that head coaching barrier down. Dungy and Dennis Green took it a step further and made it to conference championship games when they coached at Tampa and Minnesota. But they and other African-American coaches knew that the doors staying open for others to follow in their path would require them to win the ultimate prize.

Maybe this was the moment that pioneering NFL coach Frederick Douglass 'Fritz' Pollard had in mind during the 20's and 30's when he was coaching teams during the barnstorming days. Even if you're not a fan, this is a significant moment in Black history. Every African-American is standing a little bit taller tonight, but none moreso than the African-American players, coaches and general managers of the NFL.

Like the peeps in Chicago and Indianapolis, I can't wait for the kickoff on this one. And it won't be because Prince is the halftime entertainment either.
Posted by Monica Roberts at 9:27 PM

Monica, it's wonderful! What thrilling games too! Great way to start off Black History Month. I'm all for the Bears but it's like a win/win situation now. Yayyyyyyyyyyyyyyyyyyy!!!!!!!!

This is actually the first Super Bowl in a long time where I literally don't care who wins.

I have emotional ties to both teams. I have relatives in Chicago and friends in Indianapolis.

Lovie Smith's a Texan. Peyton Manning's from New Orleans. He and Tony are class acts.

I'm just gonna sit back, enjoy it and enjoy the Soul Bowl.