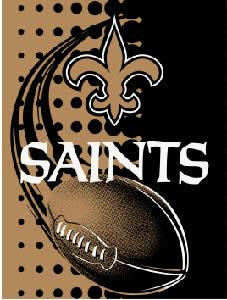 It's hard to believe, but for the first time in the 40 year history of this NFL franchise the New Orleans Saints will be playing in a conference championship game.
Ever since the Saints joined the NFL in 1967 they've been seen more times on NFL Follies highlights than Super Bowl ones. The city has also hosted more Super Bowls than they've played in.

But the Saints are as much a symbiotic part of New Orleans as the beignets and chicory coffee at Cafe DuMonde, Mardi Gras, and the French Quarter. The city lives and dies with this team. Even though I was a toddler when I lived in New Orleans, the Saints were number two in my NFL affections behind my hometown Oilers. (until they moved to Nashville) They serve as a link to the New Orleans part of my life.

So like Saints fans everywhere I was glued to the TV watching their thrilling 27-24 playoff victory over the Philadelphia Eagles in the Superdome. While I watched the game my thoughts drifted to my pre-Katrina visits to the Big Easy. I was either hanging out with my godsister and her family and friends in Marrero, driving or flying there to party, or just spending a leisurely weekend there getting away from H-town for a minute and soaking up the city's history, music and culture.

There are a lot of times when sports events and teams can bring a city together. I saw it firsthand during the Oilers Luv Ya Blue days in 1978-79, Phi Slama Jama's 1983 run to the NCAA Championship, the Rockets back-to-back NBA titles in 1994-1995 and during the Comets WNBA dynasty from 1997-2000. The Yankees 2001 World Series run helped New Yorkers for just a moment forget the tragedy that had taken place just a month earlier. The Saints are providing the same medicine for the New Orleans area.

If there's any team in this year's NFL playoffs that deserves to go to Super Bowl XLI in Miami it's the Saints. After a Hurricane Katrina forced relocation that caused them to play their home games in San Antonio and Baton Rouge, they limped through that 2005 season with a 3-13 record. This year the script got flipped. New coach, new players, new attitude, a NFC South title complete with a first round playoff bye and a rebuilt Superdome that they christened with a nationally televised win.

This ain't the 'Aints. This Saints team has an explosive offense and a suffocating defense. The players also realize that they represent something bigger than themselves. They represent the hopes and dreams of the people in the region and a diversion for just a few hours from their post-Katrina problems. Like a lot of football fans across the country I'm hoping the Saints come marching back into the Superdome in February with the Vince Lombardi Trophy in their possession.

That would set off a celebration that would rival Mardi Gras.
Posted by Monica Roberts at 12:24 AM

Girl, look I am from Chicago and we too had a 27-24 victory over Seattle Sunday. So who dat say, well I say dat.
Ok, back to reality I don't know if Chitown can go all the way with our weird QB but I am so torn because I'd love to see the Saints take it all this year. I'm pulling for that city so guess if it ain't the Bears it's gotta be da Saints.
Love your blog.

Jackie,
Same here. On one hand I'd love to see the Saints go all the way.

On the other hand I'd love to see a Bears vs Colts Super Bowl matchup. It would be the first time in NFL history you'd have two African-American coaches facing off for the NFL championship