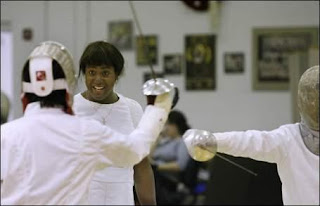 This morning I found myself rising at 7 AM so that I could hit the road with Dawn. She was competing in a fencing tournment on the IU-Bloomington campus an hour north of here.

Fencing is one of the fastest-growing sports in the US. There are an estimated 100,000 participants in various fencing sailles or clubs across the nation. Dawn's club, the Louisville Fencing Center headed by Maestro Les Stawicki is one of them. Maestro Stawicki is the current coach of the US Paralympic Fencing Team and the former head of the Polish national team from 1973-1990.

In addition, there are 82 colleges that offer fencing either as a club or full team sport. The NCAA has conducted championships in fencing since 1990.

Before the 1984 LA Games the only thing I knew about sabre was that it was the name of the American Airlines reservation system. That was before six-time Olympian Peter Westbrook became the first American to medal in the sport since 1960. He had a very compelling life story as well. He's a multi-ethnic kid from Newark who became an Olympic bronze medallist. He is considered an icon in the sport and an inspiration to many African-American fencers through his Peter Westbrook Foundation in NYC that he founded in 1991. 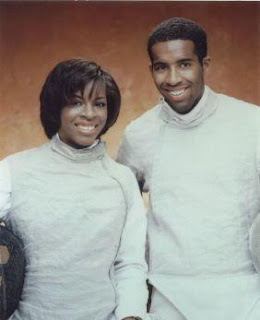 Ironically the first two kids that walked through the doors of his foundation, siblings Keeth and Erin Smart became Olympians. They competed in the Sydney and Athens Games and Keeth was the number one ranked fencer in the world during much of 2003. Several of his Fencer's Club teammates such as Ivan Lee, Akhi Spencer-El and Kamara James made US Olympic teams in 2000 and 2004. They are making much noise in the world and US national fencing ranks as well.

On the collegiate level there is Notre Dame sophomore Ashley Serrette, who is an up and coming sabre fencer for the number one ranked Fighting Irish women's team.

Internationally there is Caribbean-born three-time Olympian Laura 'The Wasp' Flessel-Colovic. She won double Olympic gold in Atlanta and folowed that up with a silver in Sydney and two bronzes in Athens in her specialty, epee.

There are three fencing weapons, foil, sabre and epee. While some fencers compete in more than one discipline, like Dawn many decide which one they like and concentrate exclusively on mastering the rules, tactics and strategies for that weapon.

It's fast paced and a lot of fun to watch. In addition, many of the fencers get to know one another during the various club, sectional, regional and national tournaments and a sense of esprit-de-corps develops amongst them.

Dawn's LFC is also making a serious effort to grow the sport among African-Americans locally. They participated in a recent demonstration event at the Frazier Arms Museum and offer after school classes at Brandeis Elementary and several other locations around Louisville. They are currently working on getting a program started at the Southern Leadership Academy.

The club recently moved from downtown to a more spacious location on the Central High School campus, the alma mater of legendary boxer Muhammad Ali. Fittingly enough, the address is 1401 Muhammad Ali Blvd. If you live in the Louisville metro area and wish to stop by the LFC, someone is usually onsite from the afternoons until early evening. If you want to see what a competitive fencing tournament actually is like, on March 3 the LFC will be hosting the Cory Stauble Memorial Open.

If you're interested in participating in fencing or would like information about what the club has to offer, you can stop by the LFC, click on this link to check out their website or call them at (502) 540-5004. You can also access the US Fencing Association website to find a club near you.

It wont be long before the heightened interest of African-Americans in fencing finally pays dividends.
Posted by Monica Roberts at 10:07 PM

I am familiar with keeth smart. we've exchanged emails and I talked to him at one of the national fencing championships. he is a nice fellow.