Gender and the Pulpit 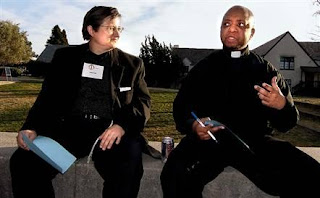 Workplace difficulties can arise for trangendered persons in nearly all professions, but what about those who are called to work for God?


Jan. 23, 2007 - In 1973, Eric Karl Swenson was ordained in the Presbyterian Church and went to work doing what he’d always dreamed of: ministering to a congregation of the Southern Presbyterian Church in Atlanta. More than 20 years later, one dream almost ended when another began. When the Presbytery of Greater Atlanta discovered in 1996 that Swenson had finally fulfilled another lifelong desire—having sex-change surgery to become a woman—it started proceedings to revoke Swenson’s ordination.

At the time of her “transition,” Swenson did not resist the church’s questions nor blame its reluctance. “I had been in the closet for 30 years, learning to accept myself,” she says. “It is difficult for me to be angry at others for not accepting.” Married with two daughters before her transition, Swenson described her struggle, years later, in a sermon: “I had spent the better part of four decades wrestling secretly with the unreasonable and incorrigible desire to be female.” After almost three years of grueling questions and debate, the Presbytery finally agreed, 181-161, to sustain her ordination, making Swenson the first known Protestant minister to transition from male to female while remaining in office. Now 59, Swenson is tall and blond, with shoulder-length hair and an assertive manner. Erin, as she’s called, continues to work as a pastoral counselor and, she hopes, as an inspiration for others who find themselves living out, what may be, the last taboo in society, let alone organized religion.

This past weekend, Swenson and her peers gathered in the hills of Berkeley, Calif., for the first National Transgender Religious Summit at the Pacific School of Religion, an ecumenical seminary that prepares students for ordination in the United Church of Christ, the United Methodist Church and the Disciples of Christ. The conference, open to members of all faith traditions, is a joint project of the National Center for Transgender Equality (NCTE) in Washington, D.C., and the Pacific School’s own Center for Lesbian and Gay Studies in Religion and Ministry (CLGS). Sixty-five religious leaders attended, from Lutheran, Episcopalian, Presbyterian, Unitarian, Quaker, Jewish and Agnostic communities across the country. On the agenda: denominational policy and outreach to transgender communities.

At the heart of almost every conversation that occurred during the conference was this: how does a person who chooses to live “with permanent gender ambiguity,” as one handout put it, also participate as a leader in an institution as traditional as religion?

Conference organizers think the time is right for transgendered persons of faith to come out of the closet. “Transgendered people are beginning to find their public voice with more advocates and opportunities for protection,” explains Justin Tanis, an ordained minister who helped put together the summit—and who was born female. With the House and Senate now under Democratic control, Tanis says, activists in the transgender community feel that they may finally be heard, and they are working hard to put together legislation on Capitol Hill, especially on the issue of workplace rights. No one knows how many people in the United States live with an ambiguous gender identity, either because of a firm conviction that they were born in the wrong body or because of a political ideology or youthful experimentation. But the issue has gained great resonance on college campuses of late, as well as in local legislatures and in gay activist circles. Last weekend’s conference was evidence that at least some of these people have strong religious identities as well.

The transgender issue is so new that most religious denominations have not yet made policy statements about it. In 2003, the Roman Catholic Church announced that transsexuals suffer from “mental pathologies” and should be barred from religious orders and the Catholic priesthood. Often using Biblical language to make their point, conservative Christian groups have treated transsexuals and other people with ambiguous gender as having psychological defects that can be cured with psychotherapy. Swenson, not surprisingly, objects to this characterization. “To pick out small pieces of Scripture and use them in a hateful way is damaging to me and to the Scripture,” she explains. “God says to love one another; should anything else matter?” Swenson finds evidence of God’s love, for her unique case, in Isaiah: “To the eunuchs who keep my Sabbaths, who choose the things that please me and hold fast my covenant, I will give, in my house and within my walls, a monument and a name better than songs and daughters; I will give them an everlasting name that shall not be cut off.” (Isaiah 56:1-5).

Transgendered people say another difficulty is that many religious denominations reinforce gender stereotypes—conventions about women’s and men’s roles in the life of a church, for example, that pose problems for people who want to live outside those rules. “The Bible has been used incorrectly throughout history to justify slavery and to oppress women,” says Joshua Holiday, a female-to-male pastor at the LIFE (Love Is For EveryBODY) Interfaith Church in Louisville, Ky. A year and a half ago, Holiday organized a gathering of African-American transgendered people, The Transsistahs, Transbrothahs Conference (TSTB), to promote greater acceptance in the black community.

Transgendered clergy say they know that parishioners can become distracted by thoughts about what lies beneath their robes, but they hope that people in the pews can learn to see them as ministers with a holy mission. Religion, says Tanis, “is about compassion and human dignity”; he hopes the seminar will teach transgendered clergy to embrace their uncommon situation and use it for good. After going through his own transition, he says: “I had a greater sense of internal peace; I was wiser and could be a better religious leader. It is a gift to be able to see the world through more than one gender’s eyes.”
Posted by Monica Roberts at 3:55 PM