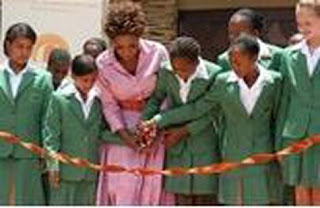 A graduate of Spelman College, Smith now heads up the prestigious school’s Center for Leadership and Civic Engagement and has regularly watched how a weekend program spearheaded by Atlanta Mayor Shirley F. Franklin is helping countless young Atlanta females seeking guidance and direction.

“There are people who find that, in the single-sex environment, they perform better. And for me, there was never a question as to whether or not I could do anything,” Smith told BlackAmericaWeb.com Tuesday, the same day talk show host and philanthropist Oprah Winfrey opened a school for disadvantaged girls in South Africa. “I know that (mentality) comes from the fact that I could do everything at Spelman.

“(Single-sex) environments boost you,” Smith said. “They take you from the corner or the back of the room, and they allow you to speak up.”

Smith is confident that the 150 students chosen to attend the Oprah Winfrey Leadership Academy for Girls in Henley-on-Klip, just south of Johannesburg, are now in a position to excel not simply because of Winfrey’s celebrity or financial backing. The young women will now be able to receive a quality education that could help them overcome the gang violence, drugs and rising rate of teenage pregnancy that plagues many state-funded schools.

According to the Associated Press, Winfrey said that she decided to build her own school because she wanted to feel closer to the people she was trying to help. The $40 million academy aims to give 152 girls from deprived backgrounds a quality education in a country where schools are struggling to overcome the legacy of apartheid.

Winfrey's academy received 3,500 applications from across the country. To qualify, they had to show both academic and leadership potential and have a household income of no more than $787 a month. Eventually, the academy will accommodate 450 girls.

The 28-building campus boasts computer and science laboratories, a library and theater, along with a wellness center.

The idea for the school was born in 2000 at a meeting between Winfrey and Mandela. She said she decided to build the academy in South Africa rather than the United States out of love and respect for Mandela and because of her own African roots.

She said she planned a second school for boys and girls in the eastern province of KwaZulu-Natal.

Winfrey rejected suggestions the school was elitist and unnecessarily luxurious.

"If you are surrounded by beautiful things and wonderful teachers who inspire you, that beauty brings out the beauty in you," she said, according to the Associated Press.

Such an endeavor is applauded by Smith and many more because of its far-reaching impact.

“She is doing three things: A pursuit of academic excellence, self-betterment and leadership work or preparation,” Smith said. “It’s great that she’s doing this for them. And of course, something like this is needed here (in the United States).”

Melissa Harris Lacewell, an associate professor of politics and African-American studies at Princeton University, said it’s hard to be anything other than a supporter of what Winfrey does. However, she hopes that more attention is paid to ensuring that all American children receive an adequate education, as opposed to creating special schools for a limited number of children.

“On the one hand, I applaud any initiative that gives opportunities to children, but I also really worry that we continue to accept the idea that some schools are just better,” Harris Lacewell told BlackAmericaWeb.com.

“My concern is that as important these pockets of opportunities are, there really shouldn’t be vast differences to the education that is available to children in this country,” Harris Lacewell added. “We ought to be trying to figure out all the time how to make public education right for everybody.”

But because there seems to be so little being done to rectify the nation’s public education system, Harris Lacewell said, too many American children are faced with sub-par education simply by virtue of circumstance. If they’re born to parents who can afford to live in communities with top-rated schools, they’re lucky; if they are born into economically-challenged communities, the education too many children receive leaves plenty to be desired.

The scenario hits home for Harris Lacewell, whose daughter attends public school in upper class Princeton while, just minutes away in predominantly-black Trenton, the school system continues to be plagued with problems.

“I really want us to get to a point as a country where we are appalled, shocked and embarrassed by the idea that any five-year-old would necessarily have a better education that another five-year old," she said.

While most ordinary citizens can’t fund a project on the scale of Winfrey’s academy, they can find a way to give something just as important to a child -- time.

“Last year, my New Year’s resolution was to pick one teenager and listen to them, and I encourage others to do that this year,” Harris Lacewell said, stressing that in addition to academic opportunities, children need to know that adults believe in them.

“I know a million goodhearted people who say they want to go to schools and talk to kids, but I rarely hear people say they want to go and listen to the kids,” Harris Lacewell said. “It turns out that these kids have a lot of ideas on how to fix their situations.”

Spelman College’s Smith agreed with Harris Lacewell that education is just as valuable to people in poorer communities as more affluent ones, and she’s hoping that Winfrey’s move to start her academy will spark conversation on what people can do to provide all children with the best opportunities.

“What this is going to do is start a global awareness of the need for different strategies for the education of boys and girls,” Smith said. “This really will allow for a global discussion of what’s going on and how we, as a culture, can value education.”
Posted by Monica Roberts at 5:41 PM

Oprah is a talented actress and successful and intelligent businesswoman.

And one of my parents’ most treasured photos is one of my little nephew in the arms of Oprah. She was making an appearance and my nephew was in the audience and because he is so cute, Oprah picked him up and cooed over him. my brother-in-law snapped a photo.

But I oppose her politics. Like many in America, I have seen many of her shows; my mother watches her all the time. There is no question that she is firmly a liberal democrat.

I hope that my disagreements are not disagreeable.

And your point is?

my point is that you should read the Wall Street Journal editorial pages for two months.

you should listen to Fox News, especially Bill O'Reilly and Sean Hannity of "Hannity & Colmes."

and then you should change your affiliation to the Republican party.

I'll never be a member of a party that not only had a proud member of it attempt to keep me from voting in the 1984 presidential election, but is the home of people who are racist, bigoted, anti-intellectual, and anti-education.

As far as Faux News, when it starts winning journalism awards and stops being a propaganda arm of the Republic Party, I might tune in only on an empty stomach