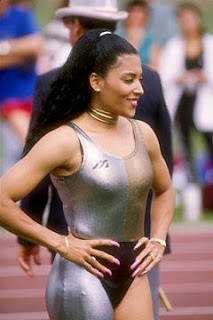 "We were dazzled by her speed, humbled by her talent, and captivated by her style."
-- Former President Bill Clinton

I remember the first time I saw Florence Delorez Griffith-Joyner. She was stepping into the starting blocks for her 200 meter finals race during the 1984 LA Olympic Games. One of my friends remarked about the sistah with the long nails, "Damn, she's fine."

She answered my rhetorical question by winning a silver medal during those games. From that day forward I began to keep up with the exploits of Florence Griffith-Joyner or as the world later affectionately called her, FloJo.

FloJo revolutionized the way we looked at female athletes. The legendary 1960 Olympic gold medalist Wilma Rudolph said about her, "For a long time, we've been thought of as 'jocks.' Florence brings in the glamour. She walks out on the track like she owns it."

She definitely owned it in 1988. Her world record times of 10.49 seconds in the 100 meters at the US Olympic trials in Indianapolis and her 21.34 time in the 200 meters set during the 1988 Seoul Olympics have yet to be broken. She also walked away from Seoul with three golds and a silver.

She was not just a world class athlete wrapped in a beautifully stylish package. Florence was a devoted wife and mother, fashion designer, actress, sportscaster and writer. She was appointed co-chair of the President's Council on Physical Fitness and Sports during the Clinton administration and served until her passing.

She was born on December 21, 1959 and grew up in the LA projects in a home that stressed the values of independence and individualty. The straight-A student started running at age seven and was a star athlete by the time she hit adolescence.

She had some tough times before she became the legend we revere to this day. She graduated from Jordan High School in 1978 and attended Cal State-Northridge. When she couldn't afford to return for her sophomore year she worked at a bank until a young Cal State-Northridge track coach by the name of Bobby Kersee helped her to apply for financial aid.

She followed him to UCLA in 1980 when he became the assistant track coach there and in 1982 became the NCAA 200 meter champion. After winning the silver medal at the LA Games behind teammate Valerie Brisco-Hooks she drifted away from track for a while and gained weight until a chewing out by Kersee got her back into the game.

She picked up something else besides gold and silver medals at the 1987 World Championships in Rome, the affections of 1984 Olympic triple jump champion Al Joyner. They got married a month after the conclusion of the World Championships and became proud parents of a daughter in 1990. FloJo died from suffocation during an epileptic seizure on September 21, 1998 a few months short of her 39th birthday.

Although FloJo's time with us was brief, then U.S Olympic Committee president Bill Hybl stated, "She was a role model for girls and young women in sports. She will be remembered among America's greatest Olympians, and she will be recalled with the legends, like Wilma Rudolph and Babe Didrikson Zaharias."

She will indeed.
Posted by Monica Roberts at 3:47 PM

I'm doing a report on Florence, and I really liked your article. Thankyou

You're welcome. As you can tell i'm a big fan of hers