I'll Get Over Slavery After Y'all Apologize For It 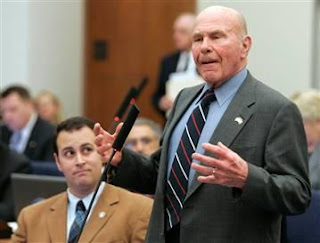 I've observed over my lifetime that when some legislator makes a racist remark, nine times out of ten they'll be a member of the GOP. So when I heard about Virginia Del. Frank D. Hargrove remarks in opposition to a measure that would apologize on the state’s behalf to the descendants of slaves and Googled his name, I wasn't surprised when I saw the (R) come up next to it.

It took me back a few years to a incident that happened when I was working for a major airline. We had a 45 minute break before we had to start working a flight. The crew was already in the gate lobby waiting to board the aircraft once it cleared customs. This was one of those rare moments in which the entire flight crew was African-American and we spent time talking about a variety of subjects.

One of the topics we discussed was then President Clinton's recent apology to the survivors of the Tuskegee Experiment. One of the pilots remarked that he needed to do another apology for slavery. We were discussing that when one of my white co-workers who had been ignoring our conversation until then remarked,"Y'all need to get over slavery." Incensed, I shot back, "When our Jewish friends stop memorializing the Holocaust, I'll get over slavery."

Later in the break room after listening to her enunciate her feelings about it, I explained to my co-worker why African-Americans are sensitve about that 'get over it' comment. I pointed out to her that Jews not only will not ever forget the Holocaust, there are museums, documentaries and oral histories passed down that keep that story alive for their future generations.

So why should African-Americans stay silent about our Holocaust?

The federal governemnt has apologized to the surviving Japanese-Americans who were interred in World War II camps and paid $250K in reparations. The German government not only apologized for the Holocaust but paid reparations. In 1992 the Japanese prime minister admitted that some women in the Asian countries they occupied during World War II were forced by the Japanese Army to become 'comfort women' sex slaves. However, the Japanese government has yet to apologize, compensate or claim full responsibility.

140 years after the Civil War ended we have yet to hear the words 'We apologize' from our government over the 246 years my ancestors spent in chattel slavery and the governmental infrastructure that arose to support it.

I was feeling Del. Dwight C. Jones, head of Virginia's Legislative Black Caucus when he stated, “When somebody tells me I should just get over slavery, I can only express my emotion by projecting that I am appalled, absolutely appalled.”

I'm more than appalled. I'm agitated about the insensitive, flippant nature of the comment. Many of the ills that Black America faces have their roots in slavery.

I'm aware that I didn't grow up on a plantation or that you personally did not own slaves. The irrefutable facts are that some of your ancestors owned some of mine. I'm reminded of that every time I check out my family tree or have to look through property records to find my ancestors. My great-great-grandmother on my father's side was born a slave in the state I now reside in. I have another ancestor on my mother's side who didn't arrive at Ellis Island in 1810 but at the port of New Orleans in chains.

Before this is dismissed as another call for reparations, continue reading for a moment. I'm not expecting it to happen in my lifetime. I have better odds of the Publishers Clearing House Prize Patrol showing up on my front doorstep with a million dollar check than having a $175,000 reparations check (the value of 40 acres and a mule in 2007 dollars) from the feds hit my mailbox.

All I and other African-Americans are asking for is a fair shot at earning our money, living our lives and having our grievances heard without having to go through major drama to do so or being dismissively told, "get over it."

It would also help if we heard the words 'I'm sorry' from our government for its role in the slave trade.
Posted by Monica Roberts at 3:25 AM

with all due respect, the title of this post demonstrates a mistake in reasoning:

one should not rely on someone else to apologize before one can feel good (or better) about a situation.

maybe the person does think he should apologize, but can't muster the courage to do so.

maybe the person is no longer around.

of course slavery was a uniquely evil institution. of course it was.

but slavery happened so long ago that no one who experienced it is alive anymore.

america and the civilized world have moved beyond slavery.

one can't hang one's happiness on what someone else may or may not do -- whether someone may apologize or not.

Saying 'I'm sorry will go a long way toward briding the hostility between whites and blacks.

It is illogical to think that the United States has moved beyond slavery. The racist attitudes that rear their ugly heads are testimony to that fact.

I'd be willing to bet your attitude on the subject would be different if YOUR ancestors were the ones brought here in chains.

"illogical to think that the United States has moved beyond slavery"

slavery doesn't exist in the US. I'd say that means the US has moved beyond slavery.
furthermore, the US combats slavery where it exists. for instance, saddam hussein's iraq had slavery. now they don't, thanks to the US.

perhaps you mean that the US has not moved beyond racism (racism and slavery being different).

if that's what you mean, then I agree.

but humanity will never "move beyond" racism.

america is, and has always been, the least racist country in the world.

what you need to get past is emotion, not wallow in it.

as dennis prager says, one's guides should be the Bible (or judeo-christian values); one's mind; and one's heart.

you're using just your heart while rejecting the Bible and your mind.

and my ancestors were slaves.

doesn't mean much; it's ancient history.

That 'I'm using reason and you're using logic line ' is the second oldest conservative trick in the book anytime they want to buttress their weak arguments. The oldest trick is to insult the other person's intelligence.

The one thing i consitently note about people who claim they are conservatives is that they post anonymously, don't put profiles on to identify theselves and hide behind aliases.

Says a lot about how confident you consevatives are in your political theory, wich will go the way of communism shortly.

As far as the Bible goes, you conservative clowns don't even read it. If you did you wouldn't have jumped off a war on a lie, cut taxes for the rich, would have apologized compensated for slavery a century ago, Jim Crow racism wouldn't exist and wouldn't be acively working to persecute gay people in this country.