A Pageant of Our Own-The MBU Pageantry System 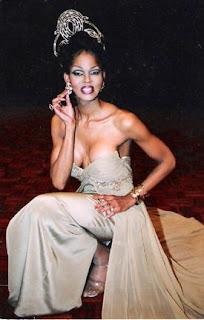 If you've never had the pleasure of watching a transgender pageant, you are missing out on a interesting and entertaining evening. The various drag pageant systems put on shows that can and sometimes do put their mainstream cousins to shame.

But some negative experiences and infighting within the drag pageant world's Big Three Systems (Miss Gay America, Miss Gay US of A, and Miss Continental) led some visionaries to form pageants geared toward various constituencies within the GLBT community.

One of those systems that was created for African-American contestants is MBU Pageantry. It's only been around since 1992 but quickly established itself as a premier pageant. Ironically, MBU Founder Randy Matthews was watching the Miss Gay Black America pageant when he was inspired to create the MBU system.

He and Niesha Dupree's goals when they started the Miss Black Universe pageant system were to not only provide the best in Black gay entertainment, but provide another competitive outlet for Black contestants.

That success was noticed by the Big Three. The Miss US of A system started their inaugural Miss Black US of A pageant in 2005, a move that was vehemently criticized by supporters of the Black-owned pageant systems.

The MBU Pageantry system touts itself as 'The Epitome of Excellence.' It has definitely lived up to that lofty goal in a short period of time and its founders are diligently working to keep it on that path.
Posted by Monica Roberts at 3:09 PM