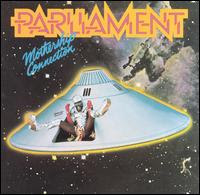 One of the things that I enjoyed about my dad's radio job in addition to the comp concert tickets was getting those promo albums. Thanks to those promo albums I was musically two months ahead of my peer group by the time they finally released it for sale to the general public.

I remember the day I got introduced to Parliament-Funkadelic and the whole P-Funk universe. I was in eighth grade at the time. Dad came home from work, tossed Parliament's Mothership Connection album in my room and said, "You need to listen to these guys."

I did and I've been a Funkateer ever since. A documentary was done that I gleefully watched on PBS late one night called Parliament-Funkadelic - One Nation Under A Groove. I even tested out to Doctor of Funkology level on the P-Funk quiz. If you want to take it, it's on the PBS Independent Lens website.

Besides learning about the various players in the P-Funk universe such as Starchild, Sir Nose D'voidoffunk and Dr. Funkenstein, I got to spend my high school years grooving to Bootsy's Rubber Band and the other components of the Funk Mob. The first concert I was allowed to attend without parental supervision was a Funkadelic one. I even learned how to spell psychoalphadiscobetabioaquadoloop correctly. My high school class jokingly calls 'Flash Light' our unofficial class song.

There are some fond memories of attending a Funkadelic concert that had a skull prop that smoked a giant joint. The lavish P-Funk Earth Tours that rivaled the ones that rock bands were doing. Pedro Bell's provocative cover art and the cartoons inside the liner notes and covers detailing the battles between Sir Nose and Starchild.

And the music. Funky, sometimes political and in many cases ahead of its time.
Flash Light is the most sampled song by rap artists. Dr. Dre used the music from 'Mothership Connection' for his song 'Let Me Ride'.

I couldn't even begin to list some of my favorite Parliament-Funkadelic songs...aaah why not? Flash Light, Knee Deep, Aqua Boogie, Tear the Roof of the Sucker, Up For the Down Stroke, One Nation Under A Groove, (not just) Knee Deep, Atomic Dog, Bullet Proof, Do Fries Go With That Shake...(and the list goes on)

The P-Funk Empire may be gone, and you have a few pretenders out there faking the funk, but George Clinton's legendary status as a music innovator and his music will be around forever.

To take the P-Funk quiz

Posted by Monica Roberts at 6:43 PM