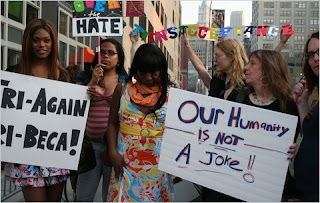 The controversial movie 'Ticked Off Trannies With Knives' was hit with a protest coordinated by MAGNET, Media Advocates Giving Equality to Trans People in New York last night.

“People are telling us to lighten up,” Love stated, “but I heard reports of two more trans women murdered this morning. It’s not a laughing matter. We’re not laughing at all.”

“We’re not calling for censorship — anyone can make whatever film they want,” said Denise Leclair. “We’re protesting Tribeca for putting this film in a competition for an award because that will make people look at this as an example.”
Posted by Monica Roberts at 10:30 PM