NY Protest Of 'Ticked Off Trannies With Knives' Tonight 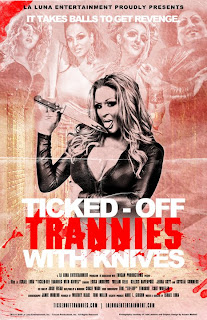 Why: The movie makes light of violence and rape against trans women, exploits the high-profile murder of teenager Angie Zapata, includes the pejorative term "trannies" in its title, inaccurately depicts trans women's identities as drag queen "performers" and "caricatures" and misrepresents the lives of an extremely disenfranchised group who suffer violence at alarming rates.


TransGriot Note: Here's a ciip of the movie and Alexandra Billings' take on TOTWK from her blog

Kim Pearson, Executive Director of Trans Youth Family Allies, says "Negative and stereotyped media portrayals of transgender people hurt the community because Americans still need more education on transgender issues. The images in this film (TOTWK) make a mockery of their lives. I want more for my child and all transgender people."

"The transsexual and transgender communities are all too often the victims of violence, marginalization and discrimination as a result of inaccurate media depictions like this film, which is offensive, dehumanizing and misogynistic and causes further misunderstanding and harm to an already dangerously oppressed minority group", states Ashley Love, Organizer of Media Advocates Giving National Equality to Trans People (MAGNET).

MAGNET had a meeting with staff at Tribeca Center on Friday, March 26, educating them about why this film is extremely problematic and dehumanizing. They refused to remove the film or make a statement that they don't endorse the oppression of transsexual and transgender women, so MAGNET is now organizing a protest/rally, in association with Families United Against Hate, International Foundation For Gender Education, New York Trans Rights Organization, and Remembering Our Dead, to demand that they remove the film, and to draw attention to injustices trans people face in everyday life and in the media. Many trans advocates, trans organizations, women's groups and allies voiced their concerns to GLAAD, expressing they needed aggressive action. GLAAD issued an uncompromising and strong petition & call to action demanding that Tribeca remove the film: http://www.glaad. org/calltoaction /032510

To support or endorse protest on Tuesday, receive information about issues raised or press questions, or become involved in anti-defamation/ media work for the transsexual and transgender communities:

Media Advocates Giving National Equality to Trans People (MAGNET)is an anti-defamation organization dedicated to educating the media about transsexual and transgender issues, as well as pushing for more authentic and positive portrayals of trans people in the media.
Posted by Monica Roberts at 10:00 AM