One Giant Leap For Women Astronauts 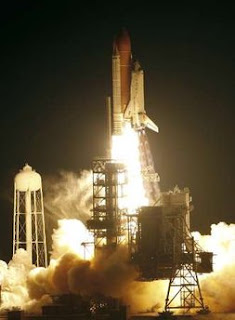 I've been a big fan of space missions and space exploration ever since I watched the 1968 Apollo 8 mission and the Apollo 11 moon landing. I followed the drama of Apollo 13, the last Apollo mission, the three Skylab missions and the beginning of the Space Shuttle program.

No matter what country launches it, whether it's mine, Russia or now China, I've always been one of these people that feels that humankind needs to begin exploring space ASAP in order for humankind to survive and continue evolving.

Unfortunately I missed this morning's 6:21 AM EDT launch of Discovery and its seven person crew. Madame Space Junkie needs to be paying closer attention to the remaining launch schedule since there are only four more shuttle launches that will happen before the fleet is retired in September.

But back to STS-131 news. This is a 14 day resupply mission to the International Space Station that will have three planned spacewalks.

This mission is also notable for the women's history it is making. This is the third time NASA has launched a shuttle with three women in the crew and the women taking part in STS-131 are Japan's Naoko Yamazaki, Dorothy Metcalf-Lindenburger, and Stephanie Wilson. 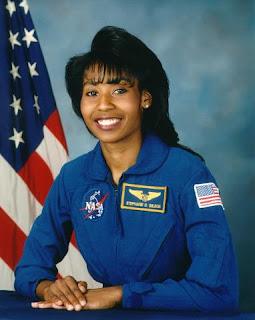 Mission Specialist Stephanie Wilson has already etched her name in the history books as the second African-American woman to be launched into space. She achieved that feat during the 2006 STS-121 mission. This is her third shuttle flight, having also flown on STS-120 in 2007.

Dr. Mae Jemison was the first, Dr. Joan Higginbotham was the third. US Air Force Colonel Dr. Yvonne Cagle is part of the astronaut corps as well but has yet to be assigned to a shuttle flight crew.

There is a fourth woman currently in space on the ISS, Astronaut Tracy Caldwell Dyson. When she and the other three women on board Discovery meet up after the shuttle docks on Wednesday, it will result in the largest gathering of women in space in history.

In all there have been 54 women out of the 517 people that have reached space, with hopefully more to come.

Will definitely be keeping with what's happening with STS-131 until the mission is completed.
Posted by Monica Roberts at 7:00 PM