While I was at the Hilton Americas Hotel`s Skyline Ballroom for the rollout of the Houston Unites campaign to defend it, one thing happened at the end of the press event that really pissed me off in terms of a reporter ignorantly asking the bathroom question again and our side wasting valuable air time answering it.

The question I have for the Houston Unites folks is when are you going to stop giving credence to a right-wing meme that needs to die?

As I learned when I went through GLAAD media training three years ago, just because a reporter asks you a question doesn't obligate you to answer it.

We aren't obligated to use our precious air time answering a question that we know is a fear and smear lie, so why dignify it with an answer?.  And I believe it is a mistake to continue to give validity to a anti-trans bathroom predator meme that we know and repeated studies tell us is a lie, but elements of the Houston media (FOX 26) seem to be stuck on stupid about.

So my proposal about how to handle the issue is this:  don`t answer a question that we know is a anti-HERO talking point.   If the media member asks that damned bathroom question, immediately pivot off of it and go straight to our pro-HERO talking points.

And here`s an example of what I`m talking about:

Question from media:  Won`t the HERO allow men dressed as women to go into women`s restrooms?

Answer from us:  Why aren`t you asking me about how the HERO will benefit the 15 classes of Houstonians that are protected in this much needed ordinance with a local remedy for combating discrimination that unfortunately happens in our city?

That`s the conversation we should be having.

Houston didn`t have a local ordinance to address discrimination until HERO was passed last year.  It sends a loud and clear message we Houstonians welcome all who wish to move and live here, do business with our city, and cements our growing international reputation as a diverse, welcoming place.

That`s how that question should have been answered, and there will probably be others we come up with over the next few months. 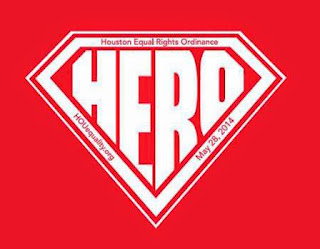 And next time, don`t send someone to me to condescendingly talk about  polling stating we need to acknowledge the fear and the lie that is stoking that fear.  I saw that data, and it's time to try a new tactic of just saying no to cosigning right wing fear and smear and calling it out for the lie it is.

I`m part of the Houston trans community they have been demonizing ever since this Houston human rights battle started and we're tired of hearing 'we need to acknowledge the fear'..

How about acknowledging the fact that now 13 transpeople have been killed because of anti-trans lies like this and the fear we trans people have of somebody in the Houston area joining that list this year because of the anti-trans hate that is about to be unleashed by the opposition?

How about acknowledging the humanity of trans people and noting we live in the H-town city limits, too?   We`re not only tired of it, we need our allies to be just as bold in calling out the lie as the hatemongers are in telling it.

I repeat:  No we do not have to answer that bathroom meme question . It is a demonstrably false right wing talking point being used across the country by our opponents, it`s the only card they can play, and let me say it once more with feeling, IT IS A LIE..

We have the facts on our side in this HERO fight.  Fair minded Houstonians are with us. .All the out of town haters meddling in Houston human rights business have is GOP support and fear.

We should not let their fear damage our economy and cause us to lose the Super Bowl , NCAA Final Four rand future corporate relocations.

So let`s have the courage on our side to call out the bathroom meme for what it is, a lie and a scare tactic from out of town  suburban professional gaybaiters who don`t care about our beautiful diverse international city,
Posted by Monica Roberts at 12:00 PM